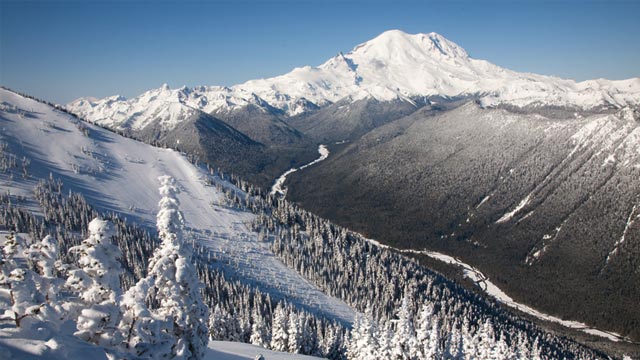 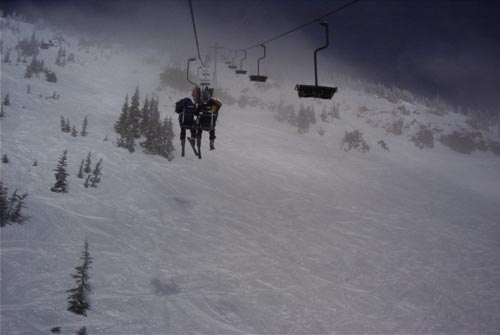 On sunny days, the views are spectacular–miles and miles of snowcapped peaks. Typically, you can see north to Mt. Baker and south as far as Mt. Jefferson, just south of Mt. Hood.

There’s only one word to describe the scenery in the Cascade Mountains of Washington and Oregon–gorgeous. And the skiing? The skiing is sick! There’s a million reasons why Whistler is consistently named the top resort in North America. Some of those same reasons are shared by a few, admittedly smaller resorts in Washington and Oregon–plentiful snow, steep terrain and backcountry gates.Every Christmas since I’ve lived in Utah, I make the pilgrimage back to the homeland–home to my family and home to the mountains that shaped me into who I am. I can’t help but smile when I think about all the nights I spent camping in a snowcave or a rainsoaked tent or the days I spent skiing in the pouring rain or the puking snow backed by gale-force winds. The Northwest is a special place.

So, I hooked up with my Pana and long-time ski buddy, Mike Richards. We would ski Crystal Mountain; the most modern of all Washington ski resorts. Crystal is owned by Boyne Resorts who also own Big Sky Montana and Brighton in Utah. With plenty of cash invested in new swings, the terrain is worthy of being the best in the state. Steep, rocky chutes and wide-open bowls abound. The accessible backcountry terrain rivals the terrain of the best resorts in North America; a huge reward for those willing to hike.

It was Saturday, which usually spells doom at Crystal, but this Saturday was surprisingly uncrowded–possibly because everyone was out doing their last-minute Christmas shopping. The bottom line, we weren’t complaining.

With the wind blowing in classic Northwest fashion, we started up the mountain. Actually, we made our way up to the Forest Queen Express to check out the goods on Silver Queen Peak (7002 ft.); accessible via the High Campbell Lift. From the top of the 6-pack, we could see High Campbell in all it’s Alta-esque glory. This is why I lugged my skis through hours of lines at Salt Lake International, this is why my closest friends are the bros I ski with, this is why there is a God.

Silver Queen is accessed by a rickety old double-chair reminiscent of the Supreme Lift at Alta. As the lift takes skiers high above the masses of weekend warriors, there’s a feeling of respect and awe as the terrain steepens and cliff-bands come into view. This winter has been kind to the Cascades and there’s plenty of leftovers from the previous-day’s storm.

From the top, we knew exactly what to do. We hiked directly into the South Backcountry… that’s what makes Crystal the gem it is–accessible backcountry. The destination was a steep chute off The Throne (6600 ft.). En route, the view of Mt. Rainier is breathtaking–you can almost reach out and touch it. Views of Rainier dominate Crystal’s peak chairs. From the top of The Throne, the wind was howling and the conditions were windpacked to say the least. I dropped in and hopped a few turns through the tight section, then opened it up. Not having skied in the Northwest for a year, I felt sketchy initially in the heavy coastal snow. After a few turns, I was back on top of things and bombing through it as if I’d skied it all season. 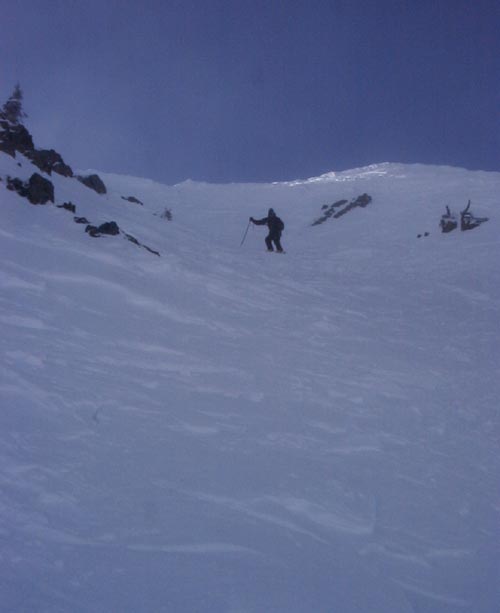 The rest of the day was filled with hiking, traversing, questioning ropelines and most of all, skiing. I was home. I was skiing with a bro.

We all ski for different reasons, I guess. I ski because it helps me realize how insignificant skiing really is, but also how important it is at the same time. The best part about skiing is feeling like you’re one with the mountain. Everything has to be in harmony; your bros, the snow, your equipment and your psyche. Skiing truly takes us away from the unreal world.

Crystal Mountain, WA lies about 90 minutes southeast of Seattle. Get there on a good day and you’ll be converted. Hit it on a boilerplate, just-out-of-the-freezer day and you’ll go home whimpering.