For those of you in the Northern Hemisphere, welcome to the New Zealand. It’s more or less as close to the equator as you, but stuck underneath the table instead of on top of it. The snow season has arrived in the happily hip, yet cold mountain town of Queenstown and provided an opener for its inhabitants to drink about. Housing is tough as the season cranks up, with lines up to the door of the local zine every Thursday afternoon ready to pounce on whatever cubic metres are available.

The Gonzo field office is in a 3 story A-frame with a crew of mountain junkies from NZ, Australia, Scotland, and Canada. We get all types down here, with the major influx from the UK along with a healthy smattering of Yanks, Canuks and mainland Euros. I’ve seen t-shirts from Scottish ski spots and a fleece from Las Lenas. I’ve even talked New England Patriots with someone who cared. 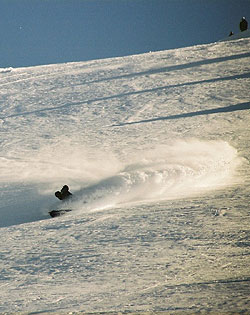 Queenstown hosts 3 ski areas within 45 minutes, and another just over an hour away to the north past Wanaka. Beyond those, the backcountry is a wealth of high alpine style bowls and chutes, but is high up on that cookie shelf. The snow starts around 800 metres and gets good around 1100 and all your lift serviced options start at the end of a mountain rally car course far above the valley floors. Keep your eyes open for sheep and the road edge. I’ve seen one guardrail so far and the basic rules are, everyone drives up in the morning, and down in the afternoon.

A tree run down here consists of one to two-dozen trees, if you happen to spot them. Much like the ski spots across the Pacific in the Central Andes, you leave the trees far behind and replace them with rocks and small scrub tussock. These Kiwis consider grass to be a reasonable substitute for snow should ones direction require it. They told me not to worry and that the grass was soft. They were right. Grass is soft. 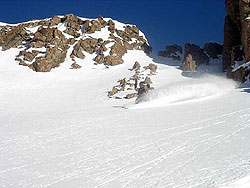 However, the more you go up, the more it’s just you, snow, rock and the local fauna. It’s common to give a nod to an alpine hare or the rubber-munching kea as you tip-toe through the talus. One needs to sit down and have a heart to heart with the board(s) when you ride here. They aren’t going to enjoy this holiday. The benefits of this alpine setting are that the lines are fairly obvious. Lolling snow tongues of all sizes roll out between wind-scoured ridges of scree and defiant looming buttresses of schist and granite.

It’s arid and cold on this side of the Southern Alps so the snow falls light and dry and in similar quantities to Eaton Mountain in Maine. However, instead of staying put, the southwesterly winds power up from Antarctica and shake and stir the snow cover into a smooth dry martini much like Christmas Jones’s tummy. You don’t ever sink more than 20 cm into this stuff, which is good because it’s only 30 cm deep. I know these numbers do not impress, but there is a whole different facet to this terrain and how you ride it. Here you get intimate with the contours and fall lines of your line as you stack a rack of Speights on the gas pedal. You can truly enjoy elevation loss here. Janes Addiction works well. 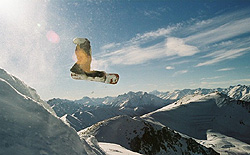 When the skies clear, it gets pretty obvious, pretty quick, where you should be headed. At the Remarkables, 45 minutes out of Queenstown, you can scope any number of twisted, technical chutes that are less than half an albums hike from the top of the lifts. Two large upper bowls drop you through steep lines down into snow covered scree aprons above lake Alta (pronounced All-ta, not Al-ta). Point it enough and you can make it about 1/4 of the way across the large alpine lake. Further down, glacial erratics and moraines from the last ice age about 20 thousand years ago provide a lunar setting of rollers and snowshrooms that are more fun than a sheep with its head stuck in a fence.

The last day out was opening day at the Ohau snowfields, which is one of the so called ‘club fields’. Normally these spots have a poma or rope tow only, but Ohau just put in their first chair, a vintage early 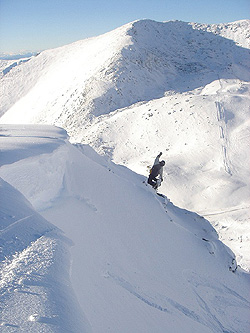 eighties two-seater. The surrounding terrain is two huge bowls that hide the Barrier Range from those who are content with staying in bounds. The top ridge puts me back in Argentina with huge granite spires between long open bowls with Mt. Cook looking on from the north. Lake Ohau is a big blue puddle 1400 metres below the ski area’s cafeteria, which is about the size of the bathroom in a suite at Vail.

The crew here in Aotearora (Maori name for New Zealand or ‘Land of the long white cloud’) is as hearty as any. Equally prepared to leave at 8 pm as 8 am, a flip of the coin will start the mission as quickly as it is proposed. On the last full moon, our team of 5 headed up to the Remarks for a night climb to the top of the ‘Toilet Bowl’ which is a 600 metre decent off the north side of Sugar Bowl. After dodging dump trucks exporting snow for the big-air contest in town that weekend, we traversed up rocky slopes for an hour and a half before taking in the Southern Alps via moonlight. I’d known these 4 characters for 2 months, but here we were, exchanging laughs and passing cans of Ranfurly Draught at 2100 metres, tight as a pride of lions on the trail of a polar bear. We each took our turns and there were some roars as all 5 of us arced down through the upper bowl into the natural halfpipe down below–all with no one to hear.

The season down here is as bona-fide as anywhere else, and what it may lack in snow totals, it makes up for in intensity. Queenstown is fully committed to snow sports, no matter how much money you have or how antiquated your gear is. If you want things toned down a bit, just 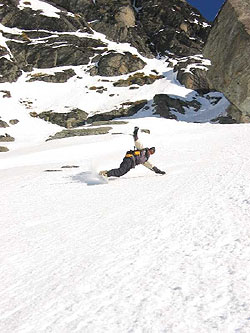 head up to Wanaka and pull back a few jugs at the Red Rock and flick the sheilas a glad eye.

So here we are, one month into the freeze and just about to put things into 4th gear. The pure stoke that oozes from the addicts down here has refreshed my own drive to unstrap and start up the boot pack. Here you can chart your progress on topo maps from the parking lot. You stare at the far off lines like that sheila in the pub and wonder how you’re going to approach her, and what will you do when you get there?

You won’t get any answers out of me, but I hardly think anyone reading this likes the easy lines either. Like every other time you stand atop something that’s taken your time, energy, and mind to get to the top of it, there are no words to the answer, just an undeniable feeling of being poised. Poised to find the one, half-metre wide way out of this twisted, towering heap of rock and snow to the freedom below. Poised to navigate the unknown be it human, mountain, country, or
hemisphere.