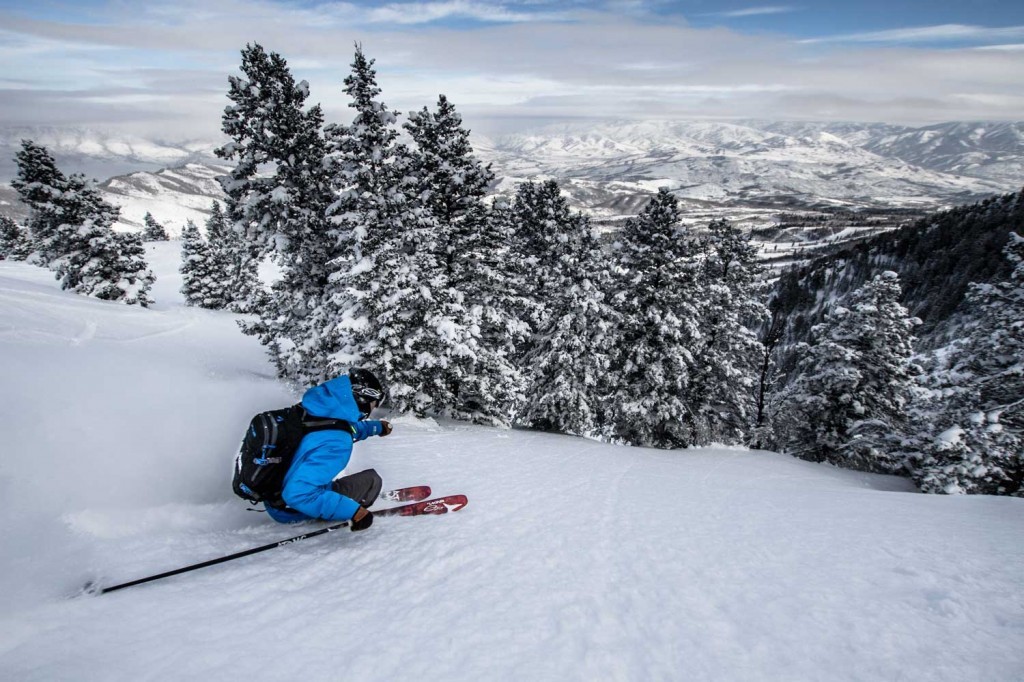 Email is great. Meg Ryan is in a movie about it, so it’s got to be good. The best part about email is planning ski trips. In a matter of seconds, I can send a message to all my bros and they know exactly what I mean. Our killer day at Snowbasin Ski Resort happened because of one short question in an email I sent out.

The message was simple and clear, it read:

That’s all I needed to say and everyone knew exactly what to do.

Snowbasin Ski Resort is a lesser-known resort about an hour north of Park City, Utah. The resort will host the men’s and women’s downhill events for the 2002 Winter Olympics.

The man has cash and is willing to throw down for a worthy, underachieving resort like Snowbasin.

The place rocks thanks to millions of dollars in on-mountain improvements including two gondolas, a tram and a high-speed quad. Multi-billionaire, Earl Holding, owns Snowbasin and Sun Valley as well as Sinclair Oil, Little America Hotel and Big D Construction. The man has cash and is willing to throw down for a worthy, underachieving resort like Snowbasin.Because I am “Corporate Boy,” Saturday is about the only day I get to ski. This particular Saturday happened to fall during the busiest ski weekend of the year, President’s Day. It was a given that every resort in Park City and Little or Big Cottonwood would be packed beyond belief with skiers from all over the U.S., but Snowbasin—about 1.5 hours north of Salt Lake—would be relatively un-crowded.

The troops gathered at the parking lot of the Basin. Present were Gabe Glosband (AKA “The Swagmaster”) and Tristan Webb from Ski Utah, Kendall Card from The Canyons Resort and his wife, Cindy, Chris Palmer and a few others. We had a dream team of skiers and snowboarders who had never ridden at the Basin before—including myself.

Our first swings of choice were on the venerable Jean-Paul Express giving us a birds-eye view of the Olympic Downhill courses. It also serves up the best scenery of any ski resort in Utah, dropping you directly below a bigger-than-life cirque of steep chutes and bowls only accessible via a ridge hike from the top of the Olympic Tram (It’s more like a couple of soda cans hanging from a cable than a bona-fide tram like the Bird or Jackson).

After waiting a couple of minutes in the tram line, we opt for some warm-up laps on the lower mountain—ducking quickly into wide-open glades of fresh pow pow.

We hop on Jean-Paul again, then decide to go for the gold and wait out the sizeable tram line to access the real goods.

From the top, a quick steep pitch with plenty of rock hits to satisfy any air-time urge leads to a short boot pack northward that delivers the real booty! We’re not talking pirate treasure here—we’re talking steep, untracked pow for 2000+ vertical feet.

We got what we came for—killer pow, great photos and perma-grin all around.

The rest of the day was divided between the two gondolas—accessing wide-open treeless bowls. Rock drops and steep chutes abound under the towering masses of rock cliffs and peaks. To put it lightly, Snowbasin rules the world! The resort delivers the best, true big mountain experience in Utah. I can’t wait to go back.

Who knows where I’ll be going this weekend, but I just got another email.