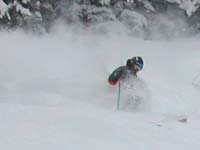 “Tonight’s weather forecast is calling for a winter storm warning along the Wasatch front. And the Cottonwoods could see up to 5 feet of snow before this is all over!” These kinds of sentences are what keep you from getting a full night’s sleep when Snowbird beckons. You can spend all night tossing and turning, trying to pick out which lines you want to ski first. Like a thundering herd, the storm arrived (on cue from Mark @ KSL 5 TV’s 10pm update) from the West-kick starting that awesome “lake effect snow machine.” Dreams of powder days past soon gave way to the maddening rush up Little Cottonwood Canyon. The road soon turned to a peaceful bliss as blankets of white became endless in sight. Many 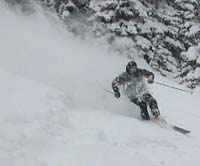 of the cars were trying to make it to Alta, but a large Avalanche had blocked the path and their chairs would not turn a crank until 12pm. It was Snowbird’s day and the ‘Bird was ready to shine.

I arrived to find that the 9am Tram line was only 5 minutes in length. Could this be true? A powder day with no waits on the Tram? It was unbelievable. By the time my Blue tram reached the summit, the ropes had just dropped on the Cirque Traverse. Bouncing in anticipation, I bolted straight for Lone Pine. Waist deep face shots advertised themselves like an all-you-can-eat breakfast buffet. It was the kind of excitement where you don’t care where and when you turn, but know that it’s just as good anywhere your skis take you. The face shots would appear to blind you of the upcoming 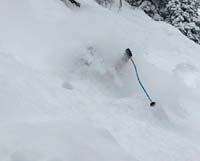 trees and then disappear right before your eyes when you next turn approached. It was almost magical. Everything seemed in tune. It was starting to feel like not just any day, but THE DAY.

After spinning some of the most tasteful Tram laps in recent memory, I ran into Snowbird local Chuck Loeffler. Last time I saw Chuck, he was busy carving lines in the Ampitheater off of High Baldy during the US Freeskiing Nationals. On our first lap- we torched the ABC chutes. Then it was North Chute. Later came Dalton’s. We systematically sliced up the mountain like 14- 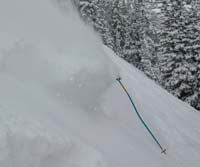 year olds dissecting frogs in Biology class. Yes–and we did it all with the same enthusiasm! Toward the end of the day, Chuck nailed the 50+ footer Smokestack. No video, No cameras, not even a tram. It was just for the powder. What a grand day it was. While the proud and determined Alta-holics were waiting for their road to open, we had already carved up more than 27,000 vertical of waist-deep champagne powder. Too bad for them.