Fame and fortune can be an interesting mix, not only for the actors but locations as well. Some people may remember Magic Mountain for it’s numerous days in the spotlight, most notably for its starring role as “Wally World” in National Lampoon’s Vacation.

We skiers will always remember Squaw Valley, not just for the 1960 Winter Olympics, but also for its place as the home of Snowfest in the 1980’s cult film, Hot Dog The Movie. Some stars age gracefully, but others try to keep up with Father Time. Squaw has done both. Whether it’s 1960, 1983, or the present, one thing is for certain- This mountain is Sick. Period. 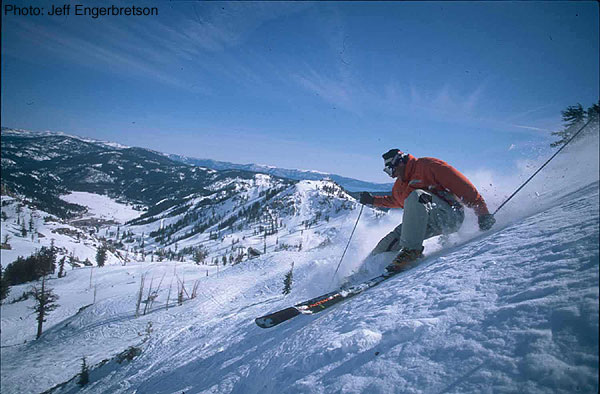 Some people may argue that the terrain here is no more challenging than that of Jackson Hole or Whistler, but Squaw Valley holds on to this Hollywood type mystique making it all the more formidable. Most skiers have seen Squaw’s chutes and cornices countless times on film. When it comes time to ski these challenging areas, the terrain takes on a whole new look. As one competing ski operator put it, “Alpine Meadows may scare you, Kirkwood can scare you, but Squaw will definitely scare you.”

What sets this mountain apart from others is that most resorts have only a few lifts holding the goods, but Squaw provides adrenaline off almost every lift. It doesn’t matter where you start because each lift provides challenges that a single ski area can only dream of. Perhaps that’s the draw of “Squawlywood.” With so many of the top-ranked freeskiers in the world calling it home, Squaw Valley remains the “Tinsel town” of the ski world.

Arriving from South Lake Tahoe fueled by burritos and margaritas, my first glimpse of Squaw is awe-inspiring. I gazed up at the massive Cable Car. It appeared to climb straight up into the clouds surrounding the midnight blue sky. The spotlights shown on the rocky cliffs emitted a hazy glow, revealing the steep, granite rock peak. I felt like I had fallen into the fairy tale of “Jack and the Giant Beanstalk.” In my sleep, I could almost hear the Giant clamoring, “Fe, Fi, Fo, Fum, who dare challenge me?” I tossed and turned all night dreaming of how I would take on this massive beast. 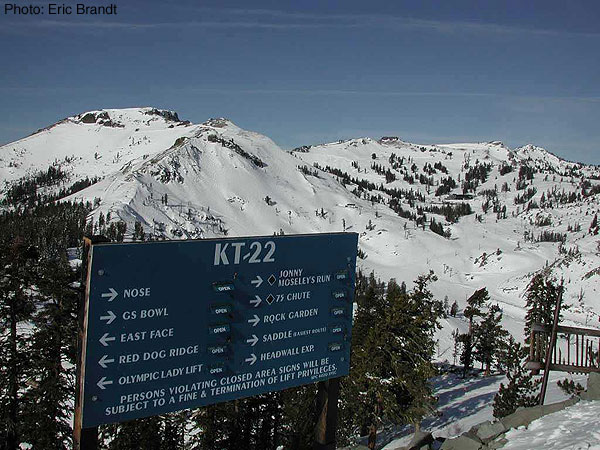 Awaking to a blue-sky morning and panoramic view, it was easy to motivate. Fueled by the awesome pastries and a glass of fresh squeezed orange juice from the PlumpJack Squaw Valley Inn, it was time to rock. Time had come to make the trek out to KT-22. The four-person high-speed quad shone like a diamond in the ruff. It was the gateway to the kingdom. Squaw’s “Magic Kingdom” chock full of exhilarating terrain. For skiers, this was Fantasyland.Climbing towards the top of KT-22, you can catch a glimpse of the famous Fingers- a particularly delicious pair of cliffs that become target number one on big powder days. Opting for the scenic tour to get acquainted, we decided to head towards Headwall Express. At the top of Headwall, it was there that we caught our first view of the infamous Palisades. Interestingly enough, there appeared to be a fresh dusting of snow. Kendall and I watched as one of the locals spewed fresh powder from his twin tip skis. Immediately, we investigated.

Our attention turned toward North Bowl where boot-high powder greeted us. Excitement mounted as we realized that the hike up to the top of Squawlywood was inevitable. It was still early in the morning on an unexpected powder day. Fresh snow greeting the small pack of skiers under the morning sun was a welcome sign. 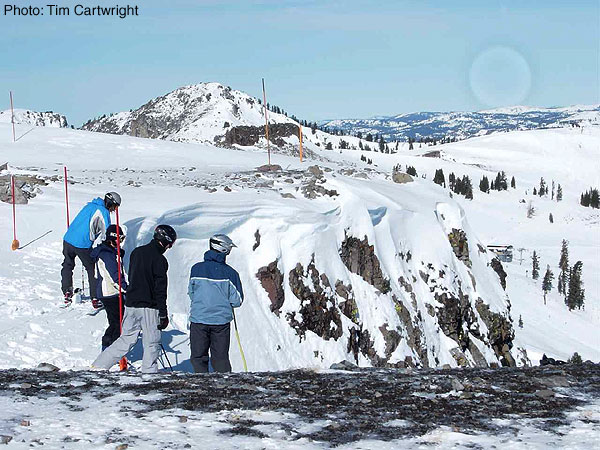 The moment was near. It was the perfect time to tackle the imposing Palisades. Unfolding itself like a movie script before us, our legs tensed up, knees grew weaker with every step, and all we could hear were our hearts beating faster and faster. In the fashion of each skier before us, I could only imagine scenes from classic Greg Stump or Warren Miller movies that have been filmed here.

But things seemed different this time. Suddenly I realized that in my mind, I was the star today. The time had come to take the screen test and tackle one of the most photographed and infamous ski lines the world has to offer. Visualizing the back flip Shane McConkey threw off the Extra Chute and churning over Scott Schmidt’s mind-numbing descents into the Chimney, I realized how frighteningly huge these lines were.Fortunately, some of the more daring entrances were closed. Under my breath, I muster a thank you to the patrol for saving some of my nerves for the time being. Then I thought to myself, “Who cares if the imposing, ‘heart in your throat big boy’ lines remain closed today. Main Chute will do just fine to scare the pants off most people.” We were not just walking on hollowed ground, but going to ski it. This is where it all started. Chills ran throughout our bodies. This is it. Time had come to make that first awe-inspiring turn. Suddenly, I heard voices going off in my head, “Three, two, one, dropping.”

The first turn was a long one. Speed came instantaneously. With a feeling of relief and sense of amazement, I piloted my skis through 6-inches of fluffy Sierra powder towards a rocky knoll in the distant. What may have appeared average to the locals rocked my world. It was the ultimate rush. After making the adrenaline connection with a few locals, we were hooked. Jeremy, Mark, and Brian became our new guides to this massive playground. With the drop of a ski pole we headed off towards Granite Chief. 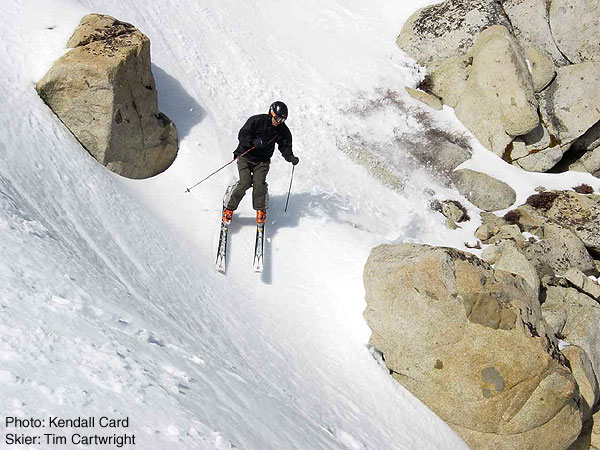 Looking up at the top of Granite Chief, I thought it really couldn’t get much better than this. The lift attendant quietly suggested, “Boundary Bowl, Boundary Bowl,” under his breath. I couldn’t believe it. He was giving me the ultimate tip of the day. Ski Patrol was getting ready to drop the ropes. I relayed this information to Brian and the local gang. They concurred. We were off to Boundary Bowl.Hiking up to the top of Granite Chief was a quick boot pack. Along the way we were able to catch vistas of a crystal clear Lake Tahoe off in the distant. We opted to drop into the Christmas Tree Chute on our way to Boundary Bowl. This imposing chute rolled over the edge. Everything disappeared beneath the tall timbers in its path. Dropping in, my skis were suddenly vertically inclined. A few quick turns and I was accelerating toward the Boundary Bowl traverse. In rapid- fire succession, another adrenaline buzz had hit me. My love for Squaw was sinking in. 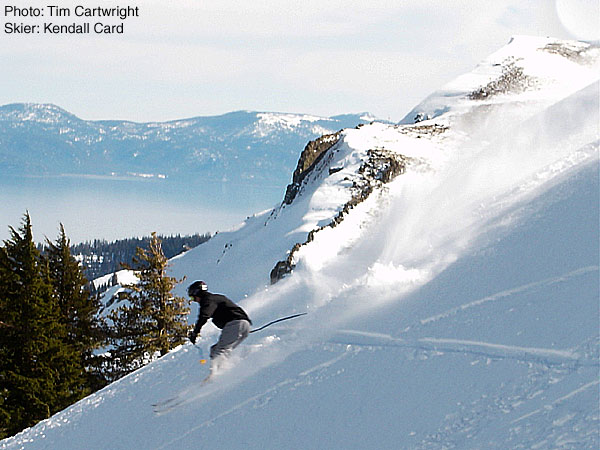 We entered the Boundary Bowl area and found endless untracked powder amid a terrain garden filled with booters and small cliffs. Everything seemed perfect. Brian, Mark, and Jeremy ripped killer lines. Another local shot through a relative ‘hole in the wall’ from the top of Granite Chief. All around us were relative unknowns flashing lines right and left. Stars or not, Squaw locals nail it. Granite Chief was addictive. One run was simply not enough. We burned our legs through the lunch hour until we were satisfied.

On our way back to the Headwall Express, we ran into a gang of old-school freestylers hanging out at Gold Coast. Sheryl was the leader of the pack. The last time I saw this freestyle diva she was celebrating her 50th birthday in style skiing powder in Las Lenas, Argentina. She insisted that we follow them around for the afternoon. While the sun began heating up, suggestions pointed us into the Sun Chutes. The lumpy powder had now turned to a beautiful corn for the afternoon. Sheryl and her gang tore up the Sun Chutes without abandon. We were chewing up the tasty corn snow like it was candy. The gang relayed their thoughts and stories of the recent Hot Dog movie reunion. They said it was like watching the Rocky Horror Picture Show. Everyone was there – many of the actors were reunited with their fans. And everybody shouted quotes during the screening. The revelry continued. It was the one movie that all skiers could relate to- a movie that transformed a generation. We felt like we were living it, ripping it up with these former world-champion freestyle skiers. They were the Hot Dog connection.

Kendall and I retired to our swanky digs at the PlumpJack Squaw Valley Inn to prepare for another day. After dining on some appetizers at Bar One, we decided that we hadn’t quite finished our day. The Cable Car was open for night skiing on Mountain Run. We figured a quick run ought to do it, but we were wrong.

During the ride up, we struck up a conversation with a local snowboarder. He asked us if we would like to join him for a few laps in the Riviera Halfpipe. A few laps then turned into 5,000 vertical feet of pipe riding. With easy access via the Riviera chair lift, we continued to amp our adrenaline addiction.

Finally, we decided to rest up our weary legs with a trip back to the hot tubs. We were so tired that it became like a “Chinese Downhill” to the finish. Our legs refused to turn (except near those ‘slow’ signs).

We had just lived a day in the movies. A kinship was created like no other. We had bonded with the locals and tasted our own fame. Squaw attitude? Not here. These locals were the top of the class. They showed us what we were searching for. The vibe, the stoke- everything was picture perfect.

One thing is for certain: This mountain is SICK. Period.