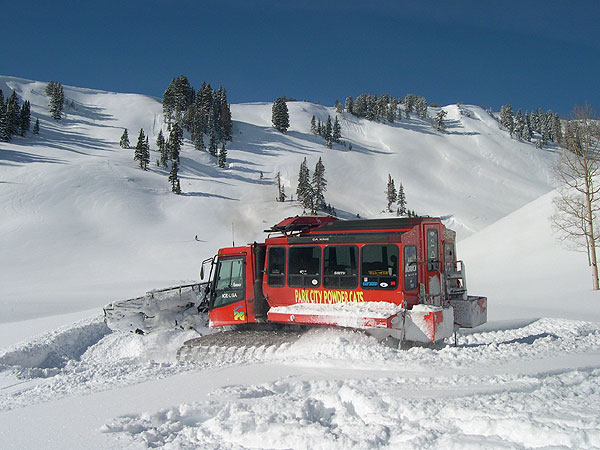 As the snow cat rumbles higher and higher through stands of aspens, we at last begin to catch glimpses of the snowcapped peaks that lay above this highway to heaven we find ourselves on. The views improve as we see tens, hundreds, and then what seems to be thousands of peaks. “Ooohs” and “ahhs” quickly change to statements like “sick” and “unreal” as we begin to grasp the scope of the terrain that lies before us. Indeed, snow covered peaks are visible against the cobalt sky as far as the eye can see and even farther in our imagination. Interestingly enough, homesteaders in the early 1900’s saw exactly what we now see, thousands of peaks laid out in all directions. 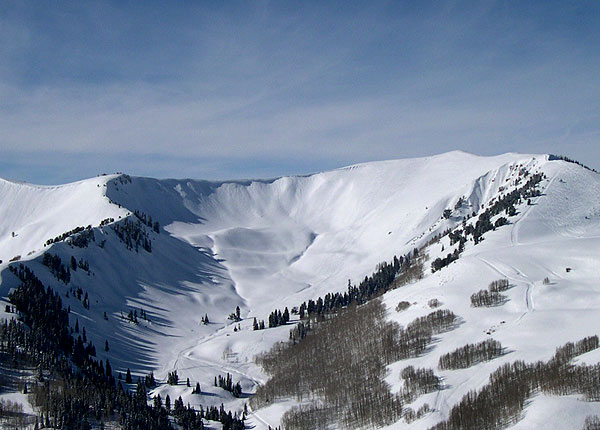 From the early 1900’s until a mere 30 years ago, Thousand Peaks Ranch was indeed just that, a ranch for cattle and sheep with a thousand peaks. All that changed when in 1978 Ray Santa Maria explored this corner of paradise and dared to dream of a special place where powder hungry skiers would experience a slice of heaven. Thankfully for us his dream came true and today Park City Powder Cats & Heli-Ski is our ticket to access some of the finest powder skiing in North America.

We first meet up with Ray Santa Maria, owner/operations manager at a hotel lobby in Park City. After a brief introduction to Matt, our other guide for the day, and a light breakfast we pile into the van to head out to Thousand Peaks Ranch. As we approach the Uinta Mountains, home of Thousand Peaks Ranch and Park City Powder Cats, the sky is overcast with a pocket of light that shines down from above, beckoning us onward. Were the powder gods sending us a sign of what was to come? Unequivocally yes. 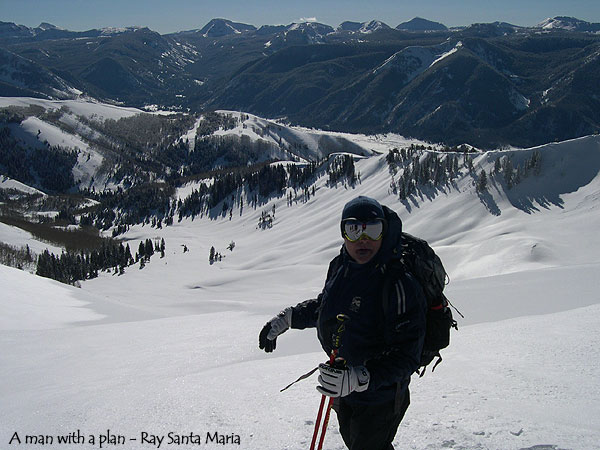 We arrive at the ranch cabin where we’re introduced to our cat driver and we review beacon safety while getting geared up. Moment’s later as the group loads the snowcat, we realize the sky has cleared, leaving the air crisp and cold. Another sign that we will be treated to some of Utah’s finest snow today, the greatest snow on earth.

Our first view of Giant Steps bowl has all of us jaw dropped. Imagine the quintessential bowl, vast and expansive with steep flanks on each side. Double the size you’re imangining and you might begin to appreciate Giant Steps. Bryan and I look at each other and we know that today it’s on. Ray’s as anxious as a school boy in math class, waiting for recess, itching to get out of the cat and play. Even after 11 years of guiding and operating PC Powder Cats & Heli-Ski, it’s all about the powder for Ray….and it clearly shows. His enthusiasm and focus sets the tone for the day as 10,000 Maniacs sings “these are the days” over the sound system in the cat. Indeed this is the day for 10 powder maniacs with Ray leading the way. 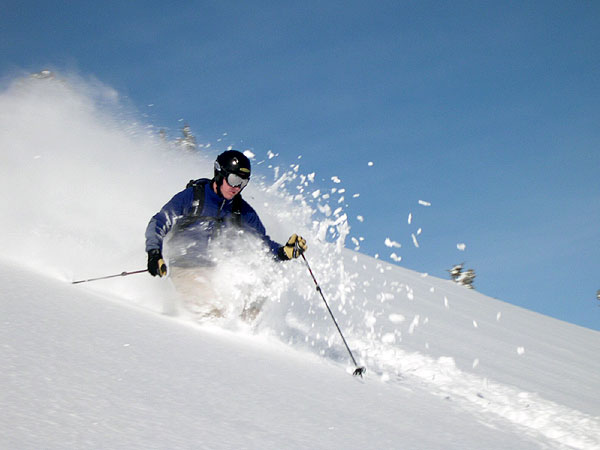 Nearing the top of Giant Steps the snowcat forges forward, cutting a path on a narrow ridge just below the summit. Barely wide enough to fit the cat, we catch view of Warren Miller chutes to our right (so named after Warren himself filmed a crew of skiers ripping these 50 degree chutes) and some steep chutes of Giant Steps bowl to our left.

As we empty the cat, Ray mentions that we’re about the ski 2′ of new that has fallen in the past 48 hours. Standing atop Giant Steps he gives us the true welcome to PC Powdercats after which we drop in one by one. As I ease into the first few turns of ultra light solid knee deep powder, I find that I’m talking to myself. “Oh yea, this is the goods”, “Feelin’ sweet”. This continues for nearly 1700′ resulting in me grinning ear to ear. As a matter of fact, so is Ray.

Watching the others descend what could possibly be the run of their lives, we realize that group dynamics is going to come into play. One of our group, fresh from Indiana, is having a hard time adjusting to the powder. That’s one of the things about cat skiing or any type of guided ski experience for that matter. The group can only ski to the ability of the weakest link, and we had just found ours. What could have turned out to have banished us from Giant Steps to lesser slopes is averted after some quick tips on skiing powder are shared with our flat land brother. 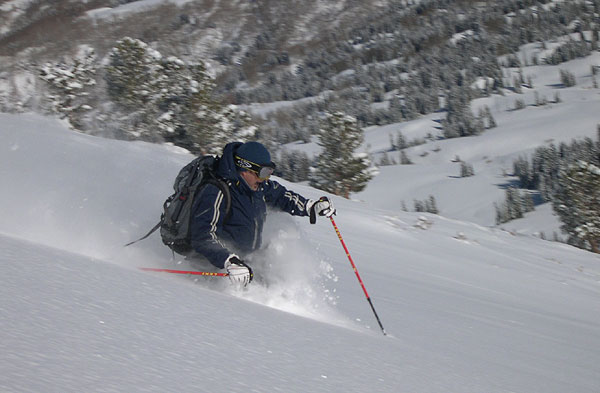 Round two is just as good as the first. It’s unbelievable that places like this exist and I get to ski fresh lines on it. Ray has lead us to the goods, but he’s quick to mention that this is what it’s always like out here. I’m beginning to realize that a guide’s enthusiasm can really set the tone for a great trip.

Unlike most cat operations in the U.S., Park City Powder Cats & Heli Ski can deliver the vert. 1700′ per run in Giant Steps is leaps and bounds ahead of the typical 700-900′ slopes you’ll find with most cat operators. The area we are skiing in is defined by above treeline open powder slopes. It reminds me of Heli Skiing in the Caribous of Central British Columbia. Big slopes, lots of room to turn and nothing but peak after peak as far as you can see.

A change in scenery leads us to Little Steps, a shorter shot just to the east of Big Steps. Dropping into Little Steps, we realize the wind has stacked the snow on this lee side of the ridge. Deep powder turns, the kind you dream about, one after another all the way down to the pick up point where our transport to the goods awaits. With each lap we make on Little Steps yields unbelievable powder. The amazing thing was that for miles around these are the only tracks we can see.

By now the group was starting to mesh together quite well. We’ve got a real good mix of both skiers and snowboarders from all sides of the U.S. New Jersey, Indiana, Massachusets, Utah and California are represented. Interestingly enough for the snowboarders, none of our drop off sites have required the dreaded traverse or hiking on thier part. PC Powder Cats is certainly a “snowboard friendly” operation as witnessed by the Quiksilver and Salty Peaks stickers on the cat.

After having our fill on Little Steps it was decided that we’d refill our energy stores with a fine lunch provided by Ray and the crew. Hot chicken noodle soup, deli style sandwiches, beverages and frisbee sized cookies all hit the spot. One of the most beautiful lunch spots I’ve enjoyed as we soaked in the sun while observing our handiwork on Little Steps.

A Change of Scenery

Thinking that we’d stick to the big bowls for the rest of the afternoon, our guides had something else in store for us. Descending into South Ham via lower Little Steps, we set our sights on some west facing ridges that start above treeline and descend through football field sized slots in the aspens, the same aspens we’d driven through earlier in the morning. With the loss in elevation, from 11,000’+ at Giant and Little Steps to 9000′ here in South Ham, we could have easily gotten into some inferior snow conditions. Matt and Ray would not let us down as we slipped into some tremendously light snow on west/northwest facing aspects.

The west facing slopes had us looking off into the distance at the back of the Wasatch. I wondered what conditions were like for all those folks skiing the many resorts that dot the central Wasatch. I’m sure they were oblivious to the fact that a mere 30 miles to the east was the shangri la of powder skiing. In fact, we’d later find out that while we were enjoying a light breeze and phenomenal snow conditions here in the Unitas, the ridges and bowls of the Wasatch were experiencing stout winds and wind packed powder conditions. Reminded me of Robert Frost, “…and I chose the road less traveled and it has made all the difference.”

As we spun our last lap in paradise, and loaded up for the cat ride back to the cabin, I had to stop and take one last glimpse around, to soak in the magnitude of the area. I made mental notes of slopes I have yet to ski that are calling my name. With over 30 feet of snow this year, they could be calling my name well into the month of May.

Every snowcat operation we’ve visited this year has had highlights or things that I’ll remember well, but of this I am certain: the images of the 1000 peaks and beyond will forever be with me. The tops of the Uinta Mountain peaks, where the powder is light and deep, the sky is extra blue there’s a snow cat and a smiling Ray Santa Maria that awaits. We hope they don’t have to wait too long for you.