Eight years ago I received a phone call from the boys at Teton Gravity Research (TGR) and it went something like this:

TGR: “Hey man, do you know anyone who can show the films at some of the colleges there in Utah?”

Me: “Well, I know all the venues so I’m sure I can put you in touch with someone.  Give me a bit to think on it and I’ll give you a shout.”

As soon as I hung up the phone I instantly thought to myself, “Hey, I can pull this off and show TGR’s film at each one of the colleges.” A quick phone call later and we were showing Further at BYU, UVSC, Weber State and in Park City. 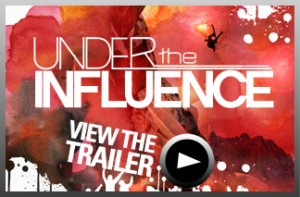 Since then we’ve either put together or been a part of putting together every TGR ski and snowboard film shown in Utah and most of our readers have purchased tickets from us right here on this site.  This is the first year since 1999 that we’ve not been in the know, heading things up as the purveyors of the stoke.

So there I was enjoying complete ignorance until yesterday when I received an e-mail from our buddy Mike Z letting me know about TGR’s new film “Under the Influence” which premiers at HarryO’s in Park City on September 26, 2008. I had to check out the trailer:

Details for the Utah Premier of Under the Influence from TGR

Location: HarryO’s on Main Street in Park City – Age 21+ only!

Tickets are available now at: www.smithstix.com, www.24tix.com, www.wantickets.com, and will be at JANS on 1600 Park Ave in Park City by next week.

Doors open at 8 PM, followed with the opening musical performance by local jazzy-hip-hop group, Scenic Byway. After they get you pumped up, the athletes will take the stage to give away tons of free gear from sponsors like The North Face, Rossignol, Dynastar, Lange, Powder Magazine, Outside Magazine, Jackson Hole Mountain Resort and Burton. Don’t forget to grab your Snowbird 2-for-1 lift ticket coupon on the way in!

Included in this lineup of TGR Athletes will be the legendary Micah Black. After the movie, he’ll be drumming away for his band, “Dolman, Black, and the Brain”.

It’ll be nice to just show up, enjoy the show and get stoked about ski season rather than worry about so-and-so who’s not on the VIP list….but it’ll be with a tinge of nostalgic that I think back to that first premier of Further 8 years ago when our little dance with TGR began.  See you there!