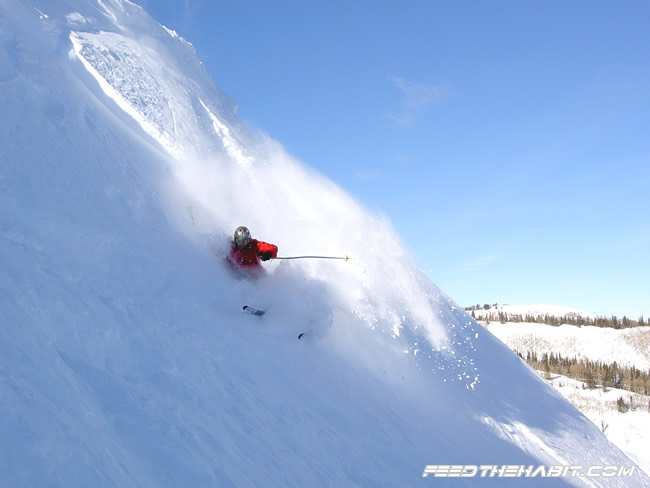 With the addition of the Empire Canyon Lift at Deer Valley prior to the 2002-2003 ski season, Deer Valley skiers are now treated to some of the steepest inbounds runs in the state. Standing in stark contrast to the plethora of corduroy that’s dished up on the rest of the mountain, the Daly Chutes hover over Empire Canyon like sentinels. And, as sentinels, they also guard the best steeps, trees and untracked lines on the mountain.

Riding up the Empire Canyon Lift, the Daly Chutes stare you in the face and just beg to be skied. Consisting of eight steep, rock-lined chutes with 40-degree plus pitches and some with mandatory airtime off the massive cornices at the top, not many Deer Valley skiers will venture to these parts. But, for those who do, they will be rewarded with some of the best lines in the Park City area.

The lift infrastructure and layout at Deer Valley is flat-out awesome! It’s very easy to get from one side of the mountain to the other with well-placed lifts and runs to avoid long flats and extended traversing. Everything is about guest service. As we load up Carpenter Express, I grab a trailmap from the dispensers located at the end of each lift line–a prime example of how Deer Valley thinks of everything to make this an extraordinary skiing experience.

After a quick ride up and then down to the Quincy Express chair, we’re well on our way to Empire Canyon in style on untracked corduroy that makes anyone feel like a hero.

Once to Empire Canyon, we’re poised to nail the Daly Chutes as many times as possible before the early afternoon. Kendall Card and I were determined to find all that the Daly area had to offer.

Accessing the Daly Chutes area is via a narrow, bumpy traverse that will give you a couple of unexpected gut-checks if you’re not careful. A short bootpack to the top of the initial ridgeline will all but eliminate the need to hit the traverse. The bootpack also set us up for 4-5 untracked turns in the trees back down to the end of the traverse and then back up to the ridgeline.

Because the Daly Chutes area is truly north facing, the snow–although heavily windblown–was consistent and light enough to blow through.

The first run was Daly Bowl, which is the widest run off the top and most people’s choice of runs. For the most part, it’s mandatory airtime off the cornice, but if you look hard, you could find a spot to side-slip into the bowl. Conditions were surprisingly good–kind of a styrofoam, grappel snow on top with lighter layers underneath, made for consistent, grippy snow from top to bottom. Once Daly Bowl fans out, don’t be afraid to duck into the trees because you’ll be rewarded with untracked and well-preserved snow before hitting Orion Run back to Empire Express.

After only one run in the Daly area, I was amazed that this type of terrain existed at Deer Valley. We were amped to continue exploring.

As we returned back to the Chutes, we dropped into Challenger next. This line was much tighter, but could be dropped without much air at all. Instead of hitting the gut of the chute, we played with the little rib to skier’s left, then ducked into the trees to find a couple of untracked turns before picking our way through tight and steep trees. Kendall chose a high pucker-factor line through the tight trees, while I continued traversing until it opened up all the way to the bottom. Make no mistake, these runs are steep and technical.

The next few runs would take us to the furthest east part of the ridge and into the last chute before the ridgeline turns back northward. Mandatory airtime greets you once more and, more important than the mandatory air, we found mandatory untracked powder lines! While Kendall tried his luck and launching the cornice a couple of times, I milked the trees to make the most of each run.

We stuck around the Daly Chutes area much longer than either of us anticipated because it was so much fun. Every chute offers steep, hop-turns from top to bottom with uncrowded slopes. Very rarely did we see anyone else on the Chutes. And, except for a quick chat with Wes the Ski Patroller, we didn’t see anyone ski anything east of Daly Bowl–we were the lone explorers reaping the bounties of each run.

After getting our fill of steep chutes, we decided to explore the mountain to find other powder stashes. Though I won’t disclose where we found the best snow, all I have to say is poke your head into the trees and you’ll be sure to find untracked many days after a storm.

After a full day at Deer Valley, we were very impressed at the quality expert skiing to be had in Empire Canyon and, as usual, we were very impressed with the layout of the mountain and the committment to guest services. It’s no wonder why Deer Valley consistently rates as one of the top ski resorts in the world. Since the recent addition of the Empire Lift and the Daly Chutes, there’s little doubt in my mind that Deer Valley will continue to stand out as a stellar destination for families of skiers who want to have an unforgettable Utah ski vacation. I know I can’t wait to hit Deer Valley again.