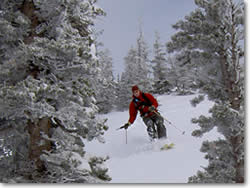 Living in Utah has its perks. Two of the main reasons why I chose to live here after college were the great skiing in the winter and the endless mountain biking trails in the summer. Over the years, my ability to get out on the slopes regularly has decreased. In college, teaching skiing I skied 60-80 days per season. Now I’m lucky if I get 20 days at a resort during any given winter.But, because I don’t get as many days on the hill as I once did, I tend to be selective—even snobbish—about the days I choose to ski. Length between storms, potential crowds, too warm or too early in the season are many of my gamut of reasons not to get out and make turns at a resort. However, with the lure of backcountry powder, I find myself skiing more and more out of bounds to get fresh tracks weeks after a storm. 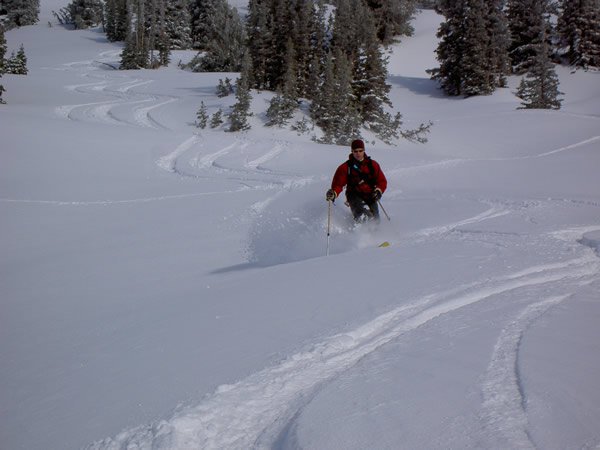 Now, backcountry skiing is not for everyone. In fact, there’s plenty of people who should definitely NOT venture into the Utah backcountry. However, with the proper training and careful experience, more and more people can and will venture out of bounds in Utah and other backcountry areas across the country.

As you weigh whether or not to go out into the uncontrolled environment that exists outside of a ski area’s boundaries, keep in mind that you are now responsible for your own safety. Both overconfidence and ignorance will eventually get you into trouble out here, but the responsibility ultimately lands squarely on your shoulders. Well, actually, it also relies heavily on your ski partners because you can’t dig yourself out of an avalanche.

I am keenly aware of the ignorant masses who venture out of bounds on any given day. The lure of big mountain powder does get the best of people. And, when you’re in Utah , where the powder is arguably the best in the world, people tend to get a little more agro in their search for bottomless turns.

Many resorts have open boundary policies, while others have closed borders. Be sure to check with the Ski Patrol if you are unsure of the resort’s policies. In Utah , The Canyons Resort and Brighton Resort both offer gated backcountry access. The gates are well marked and warning signs are well posted to alert you to the potential dangers. Still, many ignorant people motor on by those signs without even a second thought. 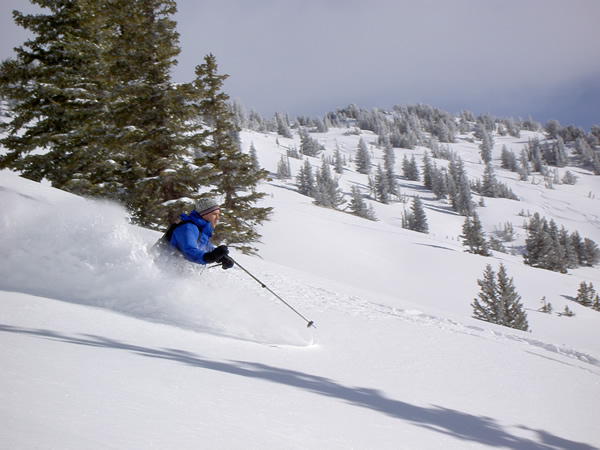 As this understanding developed, Kendall Card and I began to understand more clearly the looming danger. In 2002, we witnessed a near-miss in the Duches Draw area outside of The Canyons Resort. Two inexperienced, unprepared skiers dropped onto a wind-loaded, convex slope just after a storm. Luckily, nobody was buried, but two people went for a ride that day. Sadly though, the inevitable occurred in the winter of 2005 when a single snowboarder dropped onto that same slope and was buried and killed.

The sheer realities of the lurking dangers become even more apparent just after tragic accidents, but still many people quickly forget.

If you plan to head into the backcountry, NEVER go alone and definitely go with other people you trust and who have more experience than you. ALWAYS bring the proper safety equipment and remember—your life depends on the skill and abilities of your partners.

Here’s some equipment I’ve found to be durable and easy to use in the backcountry:

This lightweight aluminum shovel can dig through even the most solid of avalanche debris. Personally, I don’t trust any plastic or Lexan bladed shovels. I’ve heard of too many people trying to dig with one of those who wished they had an aluminum one instead. Opt for a nice expandable D-handle so you can get even more leverage when digging because every second counts.

Probe poles are a waste of time and ineffective compared with a nice, sturdy probe pole setup. The basic idea is a beefy aluminum tent pole with a pointed metal tip on one end and a steel wire thread through each pole with a tightening nut on the end.

Research has shown that the majority of burial victims die of asphyxiation. To combat this, Black Diamond developed the Avalung. This lightweight and small device is slung over one shoulder and strapped on your chest with a breathing valve located near your chin. This system effectively draws the usable oxygen out of the microscopic pockets in the snowpack. Full burial without one and you’ll be lucky to last 5 minutes, but with one, you can last an hour or longer completely buried.

Call your local Avalanche Forecast Center ( http://www.avalanche.org ), check out or buy one of several guide books available at your local REI or bookstore. And, check for training classes in your area. The more you understand, the more valuable you are to your crew in the backcountry.