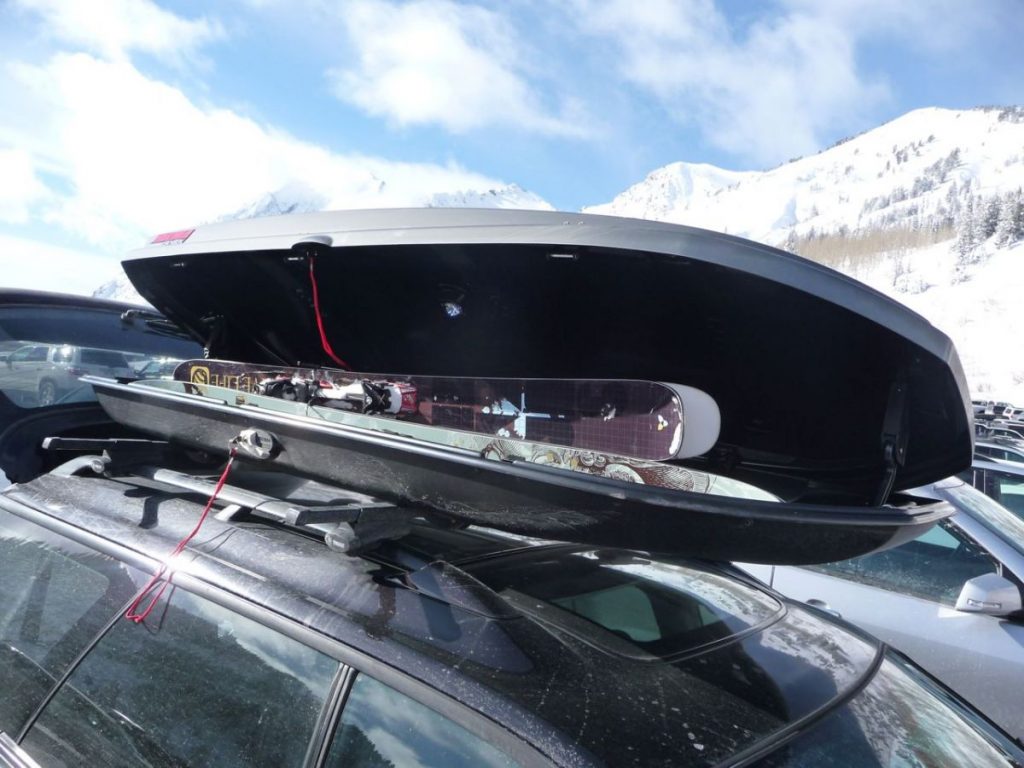 Ski racks are great for toting skis to and from the slopes, but those in the know prefer a cargo box. Why? Well, when you’re done skiing or snowboarding, nothing is better than tossing everything into the box (skis, poles, boots, wet jackets, etc.) so it doesn’t clutter your ride and so you’ve got enough room for all your buddies. But, not only is it great for post-skiing storage, many folks (ahem, yours truly) use it as mobile gear storage as well so they are ready to hit the slopes once the Ski Utah Monster Dump alert hits their cell phone.

When I first saw the all-new Yakima SkyBox LoPro Titanium cargo box at Outdoor Retailer in 2008, I was impressed. Having used several cargo boxes from both Yakima and Thule over the years, this one stood out very quickly. For starters, it looked so sleek and streamlined with a dark metallic finish, but then digging into the details of the box, the fit-and-finish and little details that went into this box continued to impress.

I’ve been able to use the LoPro on two vehicles this Winter–a 2005 Honda Odyssey using factory crossbars and a 2001 Subaru Outback utilizing Thule crossbars. Both vehicles have been well-suited for the LoPro. Lets walk through the installation process on both vehicles, starting with the Odyssey.

The Odyssey was a little more difficult to install correctly, but most of that wasn’t really the box’s fault. I’ve got factory crossbars and adjusting their location requires a hex wrench and a bit of elbow grease. As I planned the location out, it was apparent that the rear hatch would be ever-so-close to hitting the rear of the box, so I opted to slide the attachment claws as far forward on the box as possible. Doing so, put the box about a half-inch in front of the rear spoiler when the hatch was raised — PERFECT! Total install time was about 45 minutes.

Now for the same process on the Outback… This was a little easier since the Thule Crossroad towers are simple-as-pie to move. I loosened the front crossbar, set the LoPro on top, then adjusted as needed to provide a secure rooftop location. As it turned out, the aftermarket crossbars definitely provide more compatibility than factory designs. Because of the extra height provided by the Thule crossbars and their easy adjustments, the LoPro looked and functioned right at home atop the Subie. The rear hatch cleared with plenty of space and the box looks handsome atop my black Outback. Total install time was about 15 minutes.

Compared to the typical attachments from competitors, I absolutely love the claw-like clamps used to secure this box in place. Yakima definitely takes the cake when it comes to secure and easy box attachment. To slide the box in place, all you do is reach inside and lift up the latches, reach underneath and open the rearward-facing claws, then slide the box backwards until the claws are centered on the crossbars. Once it’s centered and set in place, all it takes is a quick reach inside the box where the 4 latches can be closed and the box secured.

Placing items inside the box has now also been improved with an easy-to-use lever and three latches. When opening the lid on the SkyBox LoPro, you’ll instantly notice the ultra-stiff lid. No more flexible lid warbling around upon open, this thing moves as a single piece and securely engages all three latches in one motion (as opposed to walking up and down the side to latch completely).

The new latch and locking lever combo is built to prevent you from leaving the lid unlocked because the keys won’t pull out until you lock it. This is a great feature to prevent freeway yard sales, indeed, but it does hinder your ability to load the box on-the-fly since you’ve always got to track down the key first.

With its wide profile, this box can easily carry 6 or more pairs of skis with ease. And, with its long 92″ length, even the longest of skis will fit inside. I’ve appreciated being able to toss several pairs of fat skis, poles and ski boots up top for secure transport. And, the solar-powered LED interior light ensures nothing is left behind.

On the road, the box is definitely the quietest box I’ve used with no real wind noise to speak of. My 2001 Outback has the dual moonroof feature, so any added wind noise is immediately noticed, but I didn’t notice much if any extra noise. MPG’s were pretty much the same as without the rack, so not too much to worry about there.

If you don’t need to haul large items and you primarily use the box for winter gear transportation, the SkyBox LoPro is a killer choice with improved lid stiffness, quiet performance and ease-of-use.

If you are inclined to go with a sleek, low-profile cargo box, the Yakima SkyBox LoPro remains the best on the market. After over five years of use, this one remains our go-to carrier.