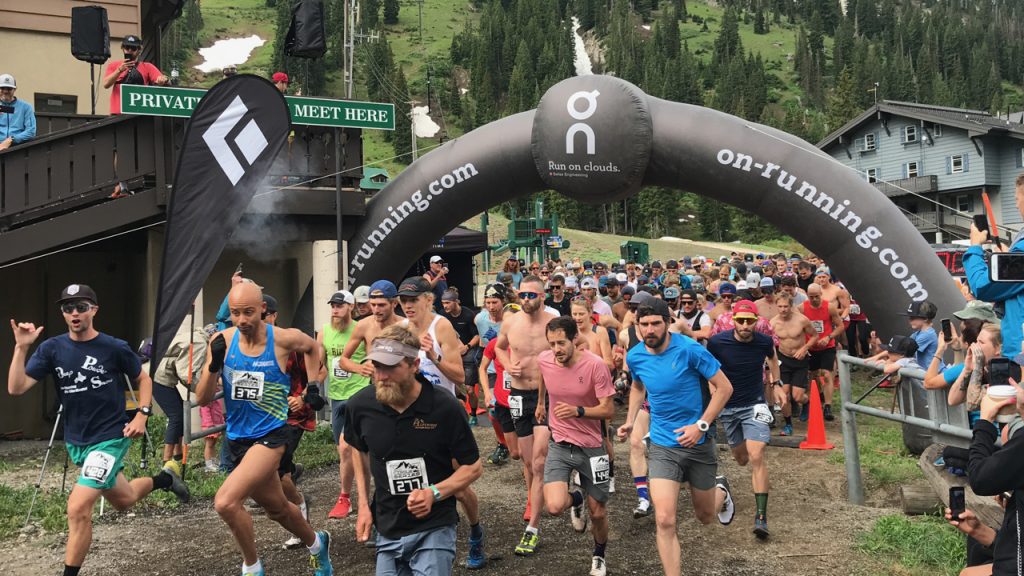 It all started with a casual email invitation. Isn’t that how these things always start? Well, after 7.1 miles and 2500+ ft of elevation gain, I may have to set up an email filter for that person’s address in the future. Honestly though, everything was good-to-go up until the Monday before the race and then the scramble started.

I had woken up Monday morning before the race with a kink in my neck. “No problem,” I thought. It will go away. And, off for a morning mountain bike ride I went. In the middle of that ride, I had to manual over a large, muddy section and in so doing, my entire neck seized up, big time. It hurt and I could hardly move my neck. 5 days until race day.

A scramble and a mandatory trip to the chiropractor at least brought some relief, but also a promise that this one would take awhile. Stretching, rolling and high doses of Omega 3’s ensued as I crossed my fingers until race-day. It got better, very slowly. And, as I woke up in the hotel at Snowbird’s Cliff Lodge Saturday morning, I was still stiff and a little concerned how everything would shake out. 400mg of Ibuprofen, plenty of fluids and I was as ready as I’d ever be.

The Cirque Series races caps participants at 500 and takes place at Brighton, Alta and Snowbird, UT as well as A-Basin, CO, Sun Valley, ID and Alyeska, AK. It mimics the many races that take place in Europe where mountain running is a staple. In fact, I was able to enjoy dinner with Germain Grangier, On Running athlete and one of the top mountain runners in the world — a super nice and humble guy that’s also wicked-fast. He’d place 5th on the day.

The Alta race is on the shorter side of the series at 7.1 miles and 2545 ft of vert, but with the abundance of snow this year in the Wasatch, the course was a bit more challenging than it otherwise would be. A 10am start seemed a little late compared to most races, but it turned out perfect here — giving enough time to sleep in, eat and feel ready to go. And, as it turned out, a summer rainstorm cleared off at about 9:45am, giving way to a damp start and a cool, cloudy race.

The start/finish line is outside the lower base area of Alta Ski Resort, heads east along the rope tow line, then up to the top of Sugarloaf, summiting Mt Baldy, then down the Collins side to return to the base area.

Again, the epic winter meant a plethora of snowfields to cross and tons of snow descending Mt Baldy along the Baldy Shoulder. These sections served as choke points where runners were stalled out behind others picking their way through the slippery, wet and muddy mess. I hadn’t glissaded on my butt like that in a long time, but I was thankful to have brought along a pair of gloves to keep my hands warm and protected.

In the end, I felt like I was able to run my pace and finish just shy of 2 hours (my goal) at 1:58:05. The course was a ton of fun and hopping into the competitive world of mountain running is addictive. Thanks to the folks at Black Diamond and On Running for the invite and support.