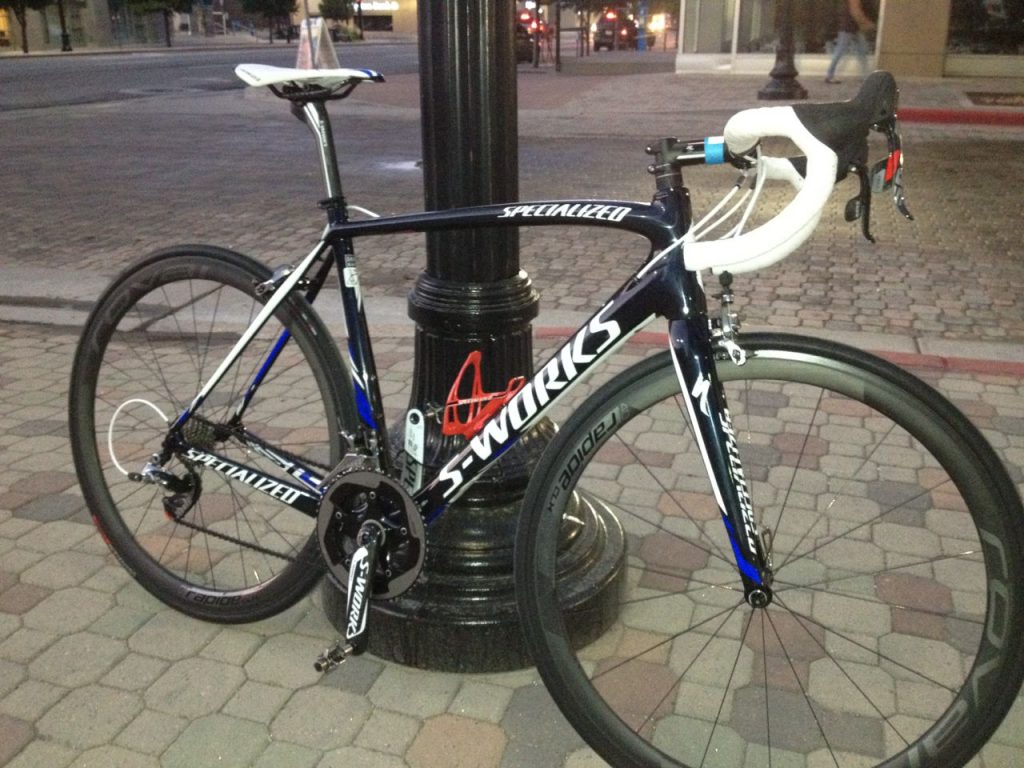 With Outdoor Retailer in town, it was time for the annual all-star dawn patrol ride up Emigration Canyon. Last year, Moots was in town with their demos, so I rode a Vamoots RSL. This year, Specialized was in town with their demo van, so we had access to the whole fleet of 2013 rides for a morning assault. Lucky for me, I was outfitted with the S-Works Tarmac SL4 Red. The team Saxo Bank edition is decked out to the hilt and rode like a dream.

With the Specialized demo van in town for their recent dealer event, the usual clan of journalists and bloggers assembled for the 26 mile ride up  Emigration Canyon. Lucky for me the 2013 S-Works Tarmac SL4 Red had my name on it for the morning. After a quick pedal change and breakfast courtesy of Honey Stinger, we hit the streets of downtown Salt Lake on our way up the canyon.

Before leaving en masse, I took some quick laps on the nearby roads and found myself some cobbles. I thought perhaps this tour-bred machine would have troubles, but whoa was I wrong. I had to double-take to make sure I hadn’t hopped on a Roubiax because this ultra-stiff race machine had a penchant for absorbing cobbles in a way I did not expect.

Right at 15 lbs., the Tarmac SL4 Red is built for speed and efficiency, but as I quickly found out, the layup of the SL4 frameset in combination with the Roval Rapide CLX 40 wheels erased much of the road chatter that plagues lesser-quality bikes. While I was wooed by the smooth ride characteristics, stepping on the gas revealed what this bike was made to do — fly.

The accuracy of the SRAM Red drivetrain was astounding. Coming from Shimano drivetrains, DoubleTap does take a little getting used to, but offers intuitive shifting that is crisp and fast. The hoods are perfectly-sized and positioned and the carbon levers offer excellent, vibration-free braking. From the drops, I did feel like the levers were a little more of a reach than I’d like, but that could just be a quick adjustment.

Lets talk about ascending on the Tarmac. Without question, this was the fastest ascender I’ve ever piloted. The lightweight wheels responded in an instant and the stiff frame transferred every pedal stroke into forward motion. As such, I propelled myself to a PR over the course of the 7.6 mile, 1200 vert climb. I felt comfortable in the saddle and would have been keen to keep climbing for several thousand more feet.

At the summit, we were met with breakfast burritos from the folks at Sylvan Sport, which was awesome fuel for the ride home.

Speaking of the descent. It’s long and fast, so I had plenty of time to test out the handling of the Tarmac. This bike was unfazed as I made my way back to downtown Salt Lake City. It’s predictable and stable at speed.

I wished the ride could have gone on all day. The Tarmac SL4 has been piloted by some pretty fast guys on the world’s biggest stages and I was able to get a glimpse of what that feels like. At $8500, this one is the most obtainable S-Works Tarmac and in the team Saxo Bank colors, you just might feel like Levi Leipheimer on his Stage 6 win at this year’s Tour of Utah.