The Niner Bikes RIP 9 is the bike that started it all for me. It was late on the second day of Interbike Outdoor Demo 2007 when I stumbled upon the Kool-aid themed tent of Niner Bikes. I met co-founder, Chris Sugai and rode off into the desert on a first-generation RIP 9. The rest is history as Niner has driven big-wheel adoption and pushed the platform in many ways. And, truth be told,  the all-new airformed 2014 RIP 9 is lighyears beyond the bike I rode on that dusty day in Bootleg Canyon. 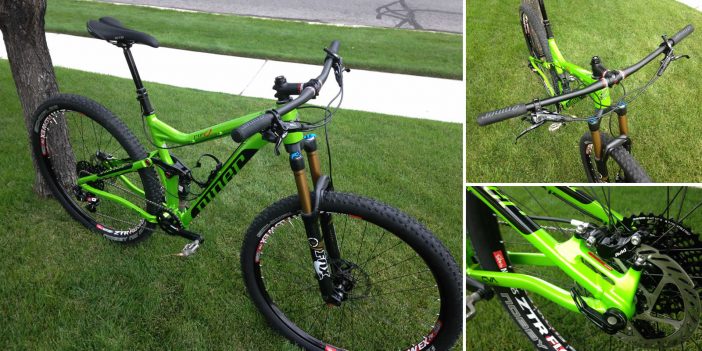 The RIP 9 AL is well-equipped.

Unboxing the RIP 9 was like Christmas morning. As everything came together, however, I realized that the new RIP 9 was quite a different type of bike than I had anticipated. The Fox TALAS 34 up front with its whopping 140mm travel, the meaty Schwalbe Nobby Nic 2.35 tires, the RockShox Reverb dropper post and the 780mm wide bars instantly made my Ellsworth Evolve Carbon feel like a kids toy.

As spec’d, the 4-Star build kit leaves nothing to be desired and should be the one you target if you’re in the market. For starters, it’s decked out with SRAM’s X01 1×11 drivetrain, but that’s not all, the rest of the spec is headlined by trailworthy top-shelf goodies as well. When all was said and done, the RIP tipped the scales at 29 lbs and change (Medium) which is a good 6 lbs. heavier than the JET 9 RDO I tested earlier this year. Taking that in, I thought to myself that I was going to suffer on the climbs, but would certainly re-kindle my enjoyment for the downhills — at least that’s what I thought.

All the first impressions, though seemingly justified, meant nothing until treads met dirt. While I was skeptical of the uphill performance, there was no question I’d have fun on the downhill, so off I went. Initial setup was a breeze with the rear RockShox Monarch RT3’s nifty sag settings. And, flipping the switch between pedal and open allowed me to use broad strokes to tune the performance based on conditions. Most of the time, I was completely satisfied in pedal mode and found it efficient on the uphill, smooth on XC trails and cushioned on the downhill. When I had the chance, I would switch to open mode for descents to use the CVA to the fullest extent.

For my first couple of rides on the RIP 9, the 780mm Niner Flat Top bars threw me off. They were wide and well, wide.  Coming from 700mm Truvativ T30 bars to these felt like riding a beach cruiser. While I did get used to them, I actually spent most of my testing time aboard the Truvativ Jerome Clementz BlackBox Bars (750mm, 20-deg rise). The modest rise didn’t measurably throw off the geometry and were noticeable only on the steepest of inclines while running in 140mm travel mode. At 750mm wide, I felt like I was in much better control of the RIP and the upsweep/backsweep of these bars gave me commanding leverage in all conditions. Bars are very much personal preference and easily changed. 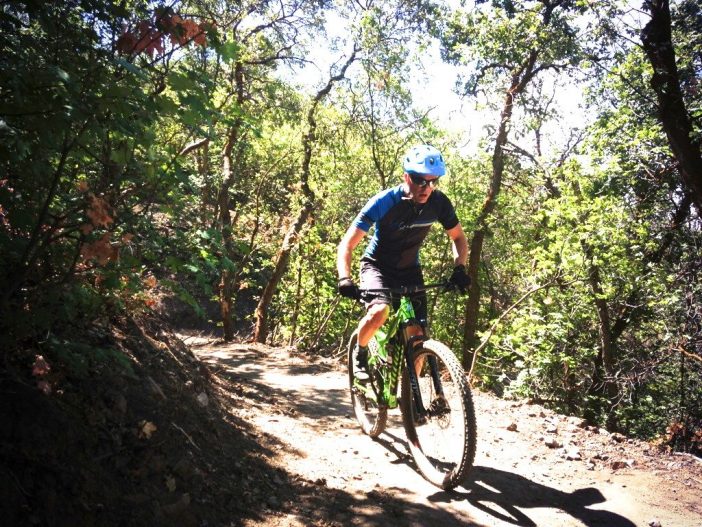 The RIP 9 is such an awesome climber. For real.

What was at first a potential downside of the more aggressive RIP actually turned out to be one of its strongest suits. Climbing aboard the RIP 9 was truly delightful — you read that right, delightful. I was so impressed with the climbing performance of the CVA that I actually sought out the most technical and longest climbs because I knew the RIP would spank them.

Spanking climbs is one part ride experience and one part elapsed time. The climbing experience on the RIP is smooth, consistent and fun with a hefty dose of traction — no matter how steep or rocky. And, Strava segment analysis revealed it’s no slow poke either. Many of my climbing PR’s were set earlier this year on the climb-friendly Niner Jet 9 RDO. Others were set on the Ellsworth Evolve Carbon this summer. Both of those bikes are much lighter and much more XC than the RIP. However, on a few climbs, the RIP beat the Ellsworth and most of them has come in just behind it.  The idea that meatier tires and more suspension means slower climbing is not always true, my friends.

With the stock Fox 34 TALAS up front, I was able to drop the front-end further when needed to amplify the climbing performance. Dropping down to 110mm doesn’t make the handling awkwardly sharp, instead it makes it more efficient and capable. On several occasions, I inadvertently kept it in 110mm mode on downhill or XC trails and really didn’t find it all that bad of a ride. Of course, riding it in 140mm mode did rake things out a bit which was noticeable on the most technical of climbs.

As shown in the photos, I did spend about half of the review time aboard the all-new RockShox PIKE 140. It tips the scales at about a half pound lighter than the TALAS and performs just as well — a great match on this bike. On occasion, I did miss the adjustable travel as the front end wandered on ultra-steep sections.

To top off the climbing ability, my test bike came equipped with an upgraded RockShox Reverb dropper post (in place of the stock Niner Carbon seatpost). Full leg extension on-the-fly truly makes for optimized climbing performance. This bike is perfect for a dropper post and the Reverb has functioned without a hitch — a worthy upgrade. 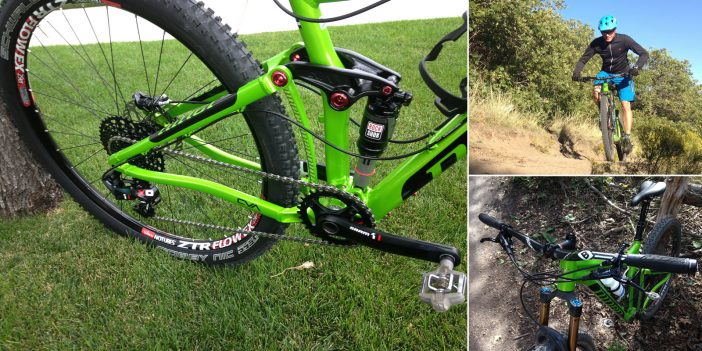 Sublime on the Downhill

After all the praise I’ve already heaped upon the RIP, was there any doubt I’d find it a dream on the downhill? While I’m a huge fan of lighter-weight, carbon fiber bikes, the little extra heft of the RIP actually made it that much better of a descender. I haven’t ridden a bike with this much squish in quite some time. I typically ride 29ers in the 100-120mm travel range and I had forgotten just how smooth and fun a little extra travel could be.

The nature of the CVA Suspension is to remain active throughout the stroke. In my experience, pedaling forces, braking forces and suspension forces are fully independent of each other — thus making for dreamy-smooth descents. I tried to find its weaknesses on the downhill, but always came away searching. Rocky, technical drops can be taken without hesitation. Flow trails with double hits, hips and step-ups are so much fun it’s silly. And fast, curvy singletrack becomes ridiculously fun. Cornering traction is consistent and handling is perfectly responsive. The suspension never seemed to bottom out with a perfectly-progressive feel and no harsh ramp-up.

What I really liked about the handling of the RIP was the way it felt like a pendulum underneath me. Meaning, when cornering — especially on wide and bermed switchbacks — the bike simply followed my input and rolled underneath me, down the fall line. It really felt like the unweighting sensation you get while powder skiing. No joke… this bike felt like the best substitute for carving bottomless powder — it’s that good. I had so much fun bombing the same singletrack I’ve ridden for years. 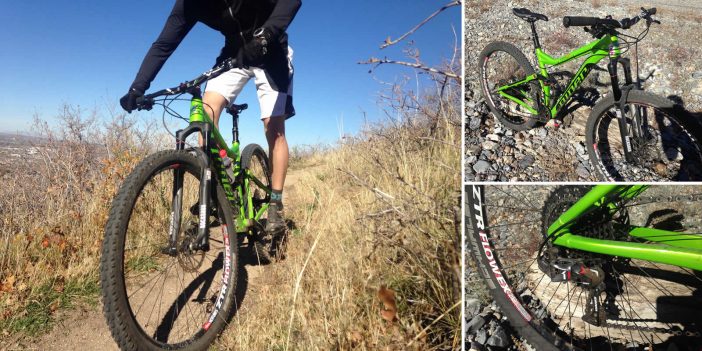 The RIP 9 Al was an absolute blast all over the mountain.

The bits and pieces of the RIP have continued to perform extremely-well. The SRAM X01 drivetrain is so good that I never want to see another 2×10 crankset again — they are completely obsolete for my fitness level and type of riding. Even on a 29 lb. trailbike like this one, I don’t see any need for lower gearing as I’m riding at XC race bike speeds uphill and trailbike speeds on the down. I’m standing and sprinting and I’m loving every minute of SRAM’s new simplified drivetrain.

I’ve got to give the nod to the NoTubes ZTR Flow EX wheelset on this bike. These wide hoops are tubeless wonders and provided a more usable contact patch with the Schwalbe Nobby Nic 2.35’s. The wheels were invisible performers throughout the duration of my testing. They have rolled well, cornered without a fuss and remain straight as an arrow. Tubeless is the way to go and was the only way I ran these wheels.

The RockShox Reverb has been fantastic on this bike and has functioned flawlessly — worth hauling around the extra weight for on-the-fly adjustments. This type of bike really shows the value of dropper posts as it immediately transitioned from climber to descender. I also appreciated being able to slam the seat when racking multiple bikes on the Yakima Holdup 2. NOTE: The stock 4-star build includes a Niner carbon post, not the Reverb.

I’m having to dig deep, but there have been a few small issues. The first is personal preference. While the Niner Flat Top bars are nice, I’m personally more fond of the 5-degree up and 7-degree backsweep of the Truvativ bars. The 9-degree backsweep makes the bike feel a little “newsie” for my tastes. Bars are an easy change and nearly everyone has their favorites.

One item that can’t be changed is the inability to run a Stealth Reverb. I’d sure love not to have to finagle with the cable every time I drop it or put it up in a bike stand. The last nit-pick is with the small triangular opening in the seatstay arch. Tire clearance when run with these 2.35 tires is such that rocks are easily lodged between the tire and the arch, causing an “oh crap, did I just break something” moment. On several occasions, I had to stop and dislodge a rock as I buzzed down the trail.

The all-new Niner RIP 9 once again showed me what a perfect trailbike should be. Anyone knocking the maneuverability and fun of 29ers simply hasn’t ridden a dialed big-wheeler yet. The RIP can hang with my XC buddies and crush them on the downhill. It can swoop from turn-to-turn on the most sublime singletrack Utah has to offer. The all-new RIP is a quiver of one.

The RIP 9 Al is a fantastic all-mountain slayer. Although it aces the entire mountain, it's climbing abilities blew me away and made the downhill that much more fun. Though the aluminum model is no longer offered, have a look at the RIP 9 or RIP 9 RDO for a lighter, stiffer platform.