Sometimes new versions of an existing products are yawners. This is not one of these times. GoPro’s new HD HERO2 is a meaningful improvement of the older HD Hero. Reviewed here for skiing purposes is the HD Hero2 Outdoor Edition ($299.99). I’ve also found the the LCD BacPac ($79.99), the chestmount ($39.99) and the extra battery BacPac ($49.99) accessory useful. In this article I’ll primarily review video quality of the new GoPro HD Hero2 and compare it against the video quality of the HD Hero. I’ll also review some improvements of the HD Hero2 vs the HD Hero.

For background, here are older articles where I compared the older generation GoPro HD Hero and the ContourHD and also reviewed the ContourGPS – all with a focus on snowsports.

The GoPro HD Hero2 is a relatively cost effective, robust POV camera. Video quality is pretty good. Improved is the HD Hero2’s ability to handle very bright light and white balance throughout various lighting conditions. Having said that, like all POV cams in this price category, the HD Hero2 benefits from lots of light and suffers when lighting conditions change quickly. The HD Hero2’s audio is not noticeably improved over older generation GoPro cameras; although it can be said that not one single POV cam I have tested has useable audio. As are all other POV cams with CMOS sensors (you won’t find anything with higher – end CCD image sensors in this price range) the HD Hero2 is subsceptible to producing jerky jellovision video. Jerkiness can be minimized by using the camera in appropriate conditions and with appropriate mounts.

Included with the GoPro HD Hero2 is its incredibly tough waterproof casing. Accept no substitutes if you are hard on your gear.

To summarize, GoPro’s new HD Hero2 is a substantial improvement over older product versions. It’s compact, tough, much easier to configure in the field, and produces good video. 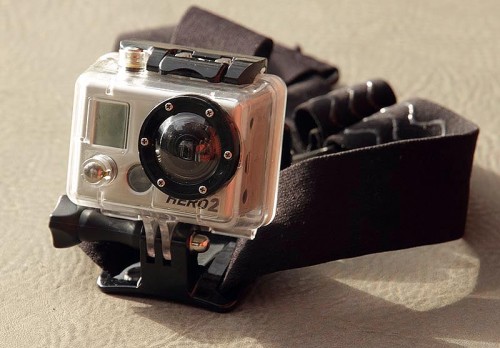 I am relatively experienced with shooting POV videos having shot literally hundreds. My emphasis (like the vast majority of users) is to produce web-quality edits uploaded to the web via Vimeo. I have little interest in video post-processing and limit my efforts to merging raw clips together and sometimes adding text and soundtrack. My videos mainly showcase skiing and biking in the Southwestern British Columbia, Canada area. Although I’ve tried to pay attention to concerns that “prosumer” videographers may have, the comments in this review will reflect my biases.

I have provided many video clips as sample output. PLEASE READ THE COMMENTS ABOUT THE VIDEOS (click the Vimeo links to see them in HD and/or to read the comments) which outlined how I rendered and presented the videos. You can process video output to preserve as much quality as possible (larger files say for file-sharing via DVD) or like I did, you can process the videos to present pretty decent quality while managing file sizes for video-sharing via web. In general, my videos combine different points-of-view, include static footage and tend to be shorter. Your mileage may vary.

Video editing software is outside the scope of this article. However, I prefer simple software that doesn’t crash. Apple’s iMovie appears to set the standard in this regard. For the PC, I found that AVS4You is the closest PC equivalent to iMovie. Advising on what computer setup to buy is also outside this article’s scope. However, if your computer is 3 to 4 years old and the video is crap; its not the camera – its your laptop. HD video requires quite a bit of computing horsepower. 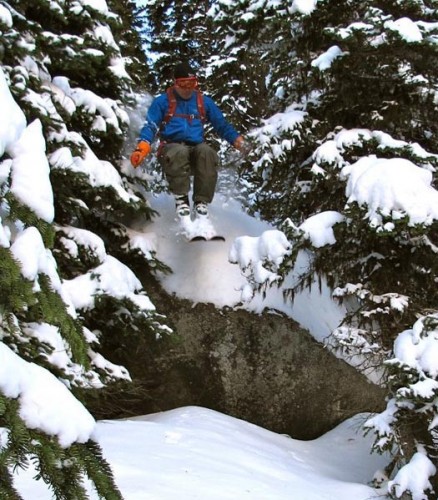 The specs and feature descriptions of the GoPro HD Hero2 are here (toggle between the tabs to see them) and do not need to be repeated ad-nauseum. The lens is purported to be 2x sharper than the previous GoPro HD Hero but keep in mind this is a small budget camera so take that with a large grain of salt. Essentially the lens is a fixed focus fast (aperture 2.8). It’s main limiter will always be the tiny sensor endemic to all cameras having this small a form factor.

Comments on main specs and features follow (** indicates changes/improvements from the HD Hero): 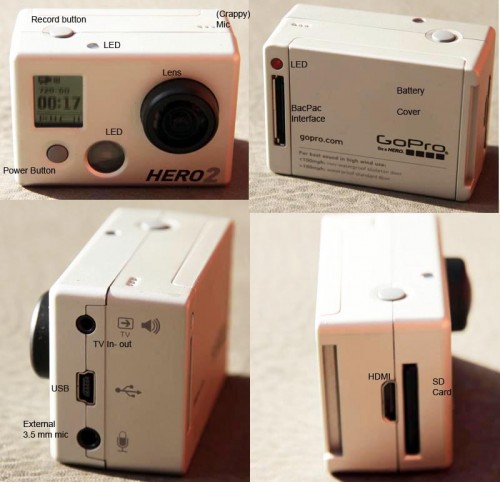 The GoPro HD Hero2 has a dizzying variety of different resolutions ranging from 1080p (ie 1920x1080pixels high-definition) to WVGA (ie 848×480 standard definition). You can also shoot at various frames-per-second ranging from 120 fps (useful for capturing slow-motion) to 30 fps. Finally you can change from different fields-of-view ranging from 170 degrees (fisheye) to the rather narrow 90 degrees. Consult the Specs tab to review all these options. Note that there is no support for 127 and 90degree FOV in 720p even though that is specified. GoPro says they will fix this in a subsequent firmware release but don’t hold your breath.

Many people use the 960p or the 720p HD settings to shoot video. Suffice it to say that both options work well. I prefer 720p because I will often blend footage from other 720p cameras with the GoPro footage just to mix things up and its nice to keep the same video aspect ratio. However, I acknowledge that 960p is also a nice option because you can obtain a slightly bigger field of view of the subject you’re shooting. Because many will ask, I don’t use 1080p because in my opinion that aspect ratio requires a very steady hand (or body) to shoot and footage in that aspect ratio is invariably jerky and subject to jellovision effect.

There can be no doubt that video quality is much improved. Sharpness does seem to be improved although the differences are more apparent in bright light. In dark light, there’s not much to choose between the GoPro HD Hero2 and HD Hero are decidedly average. Where the HD Hero2 shines is in bright light. Skin tones look more natural.. Highlights aren’t blown out. Judge for yourself and see the first video in this article.

The LCD BacPac is in the category of nice to have but not necessary. It’s fairly trivial to figure out where to mount the GoPro to get footage of your choice when you’re skiing. The same can be said of the Battery BacPac. You might need it for multiple day shots or the odd time when you’re shooting more than 4 hours in a day but most users will be able to get by without them. They are plug and play – working seamlessly with the HD Hero2.

There can be no doubt that audio is still the achilles heel of these cameras. To be blunt the internal mic audio is unuseable garbage. What can you expect? It’s a tiny microphone inside a waterproof case and you’d be deluded to expect otherwise. Included is an option to use a 3.5mm external microphone. As stated earlier, using it requires drilling a hole in the housing or using the GoPro Skeleton Housing ($39.99). Either method means that the HD Hero2 will no longer be waterproof. Reluctant to potentially destroy the camera I haven’t brought myself to drill the housing as yet but will update this article with comments when I do. Rest assured thought that other third party video tests have shown that the external mic functionality works and results in useable audio

I have rather more complimentary things to say about the photo quality. Photographs can now be taken in 11 or 5 MP resolution. Capture modes range from single shot to timed exposures ranging from 5 to 60 seconds. There is also an option to take a 10 photo burst which takes photos at a frame rate of an outstanding 10fps. Let’s not get too crazy here though people as the old adage of “If its too good to be true then it is”. The HD Hero2 is still a $ 300 POV camera which is primarily optimized to take video and secondarily to take photos. The photos are decidedly average. Much better quality than the previous generation HD Hero but you are still limited by a miniscule light sensor. There are many articles which discuss the quality of megapixels versus the quantity of megapixels so I won’t belabout the point. Suffice it to say that you can get pretty good pictures out of the HD Hero2 in bright light. Do not expect much more than the odd blurred snapshot when you use the HD Hero2 to take pictures in dark conditions. 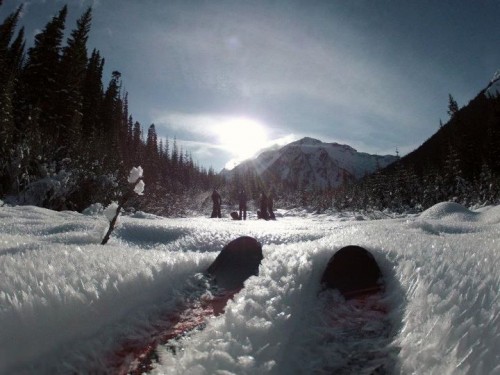 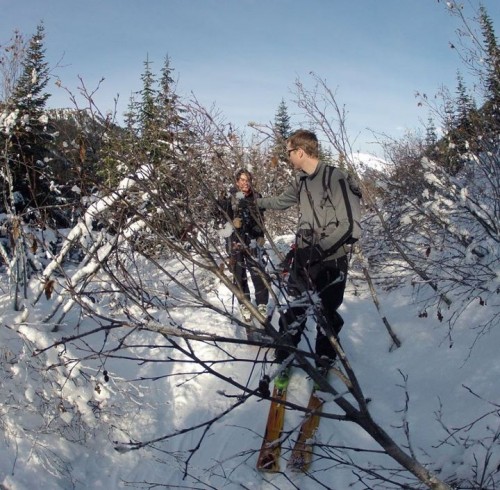 There’s really not much to say about the GoPro mounts. They work and they work well. They’re not flattering especially when worn on the helmet (how can you not wear a toaster on your head and not like a gaper teletubby; and yes I know I’m a fashion queen for pointing this out?) but they are easy to use. One suggestion I have is to use a lanyard (some thin string will work) and tie the GoPro to your helmet or if you’re mounting it on skis using the 3M mounts. That 3M glue is pretty sticky stuff but will rip out given a good tomahawk. Inquiries about lost GoPro’s are trending high among ski area lost and found offices!.

Non-helmet wearers like myself can use the headband mount although I will tend to pull the hood down over my head to help secure the mount. Using the GoPro chest mount remedies the Teletubby fashion faux pas but you will find that your videos will have your hands constantly blocking footage.

What’s Included in the Box?

Basically everything you might need to get going for a GoPro HD Hero2 helmet or headband mount is included in-box (click the “What’s Included tab”). You might want to add the Chest Mount if you like that perspective but many will do without. If you want to shoot video for more than 2 hours a day (bearing in mind that even your mom isn’t going to watch that much video of you no matter how much she loves you) you might want to also buy another battery or buy a battery BacPac.

Here’s the list of what comes in the rather overkill GoPro HD Hero2 Outdoor Edition package: