I must say I’ve become quite a believer in the 29-inch revolution. However, my enthusiasm is a bit tempered because 29-ers aren’t for everyone.  Still, there are a whole lot of riders out there who can benefit from the increased momentum and smoothness only bigger hoops can provide.

So, from cycling’s counter-culture to mainstream, 29-ers are coming out of the woodwork and who else to wave that banner than Mr. Tony Ellsworth with the newly-introduced Ellsworth Evolve 29-er. Ellsworth knows a thing or two about building bikes, but can we expect the world from a first-generation product? If it’s an Ellsworth, I think we can. 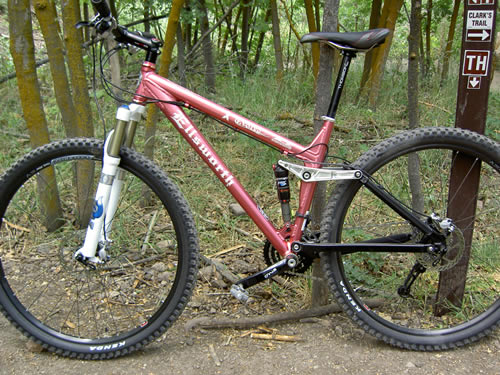 Built from the ground-up as a 29-inch bike, the Evolve does use proven Ellsworth technology (Horst link, ICT Rockers, etc.), but Tony Ellsworth felt that the Evolve should be built from scratch to make the most out of the 29-inch wheel platform. However, it didn’t take much tinkering to make the Evolve a reality since I was told there were only two full prototypes built before going to production.

Taking the best traits from the Truth, Epiphany and Moment, the Evolve has just the right dynamics to nail the 29-er trailbike market. With some 29-ers suffering from floppy handling and top-heavy weight distribution, Ellsworth sought to eliminate those negative traits by getting the whole geometry nailed down.

Here are a few more specs on the Ellsworth Evolve: 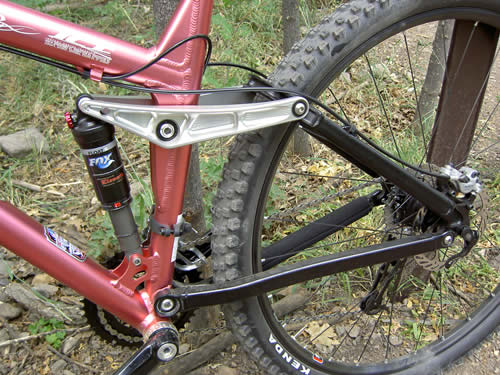 I happened to get my hands on the Project Pink Ellsworth Evolve at the same time I had a Niner RIP 9 to test, so it has been a perfect side-by-side comparison between the two. While they both use completely different suspension designs, they are both solid trailbikes with serious rolling power.

Once built up, the Project Pink color looks amazing. I’m not one to typically ride a pink bike, however, this one looks great and it benefits a great cause. Overall fit and finish of the anodized frame is on par with what I would expect from Ellsworth or other high-end manufacturers.

Of course, Ellsworth does not sell complete bikes, so you will get to custom-build it to your liking. That said, this particular build is about what most people would use if they were to build their own. Yeah, you could go with more bling, but this workhorse spec is dialed in with a Fox F29 100mm fork, SRAM X.0/X.9/X.7 drivetrain, WTB Laser Disc Trail 29-er wheels, Avid Juicy 5 brakes (weakest link on this bike), Easton MonkeyLite SL carbon handlebars, a pink Chris King headset, Thompson Elite seatpost and Truvativ Stylo cranks. In other words, it’s a worthy spec. Out-the-door, you’d be talking at least $4000 retail for the whole shebang.

OK, so onto the trail…

The first word that came to mind when riding the Evolve was efficient. I’ve ridden a few Ellsworth’s in the past (Moment, ID, Joker) and the ICT design continues to amaze me. It is a great example of both efficiency and smoothness, which sometimes can be an oxymoron–not with the Evolve.

When pedaling uphill, the rear end stays firmly planted on the trail for sprightly climbing–even when the going gets steep. With the custom-tuned Fox Float R, you don’t get much adjustability and frankly, that’s very refreshing in a world of 5-way adjustable shocks that are typically setup wrong. It also speaks volumes about how well the Evolve climbs… again, super-efficient. I only experienced a wee bit of front end wander on the steepest of climbs.

On several rides with 2000+ vertical feet of climbing, I’ve felt like the Evolve has been as fast or faster than any bike I’ve ridden. As with all 29-ers, you’ve got to have a fair amount of leg and lung power to stay ahead of it. If you like to languish in the granny gear, you may find that you don’t have the ability to power through stuff at low speeds. I’ve found that you need to stay ahead of the gear’s natural cadence–if you do, you’ll be rewarded with a bike that can power up just about any climb.

OK… so the Evolve can climb, which is not much of a surprise. How well does it descend?

In talking with Tony Ellsworth, he and I chatted about some of the typical drawbacks of 29-ers. The one that comes up the most is sloppy handling–especially at low speeds. Honestly, when it comes to descending on the Evolve, it just feels like every other good descender I’ve ridden with 26-inch wheels. It just feels natural and nimble around corners and off drops.

Twisty, turny singletrack allows you to lay into the corners and really have a fun time on this bike. I will say that it is by no means a long-travel squishy trail machine and it does have its limits with a 4-inch travel fork, but 29-inch wheels will smooth out the trail considerably. Everyone always says this, but at only 4-inches front and rear, this bike does feel like it has more travel–thanks to the larger wheels and the ICT suspension.

Don’t plan on dropping anything huge on this bike or on any 29-er for that matter. It shines on normal trail riding and average 2-4 foot drops, but anything beyond that you’re on your own. 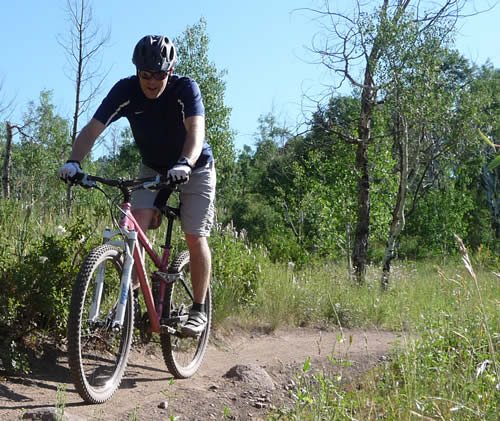 The Bottom Line on the Ellsworth Evolve

The Ellsworth Evolve is definitely one of the finest trailbikes available today (26 or 29-er). I have enjoyed it’s capable climbing ability and it’s fun character on twisty, turny, rocky downhills. Definitely not the squishiest of trailbikes, but the fast-rolling nature of the 29-inch wheels combined with the proven ICT suspension provides some of the best handling available today. It does come with a price, but I also like that it’s 100% American made from an environmentally-friendly company. And… get the Project Pink color, it is definitely a hot-looking bike.