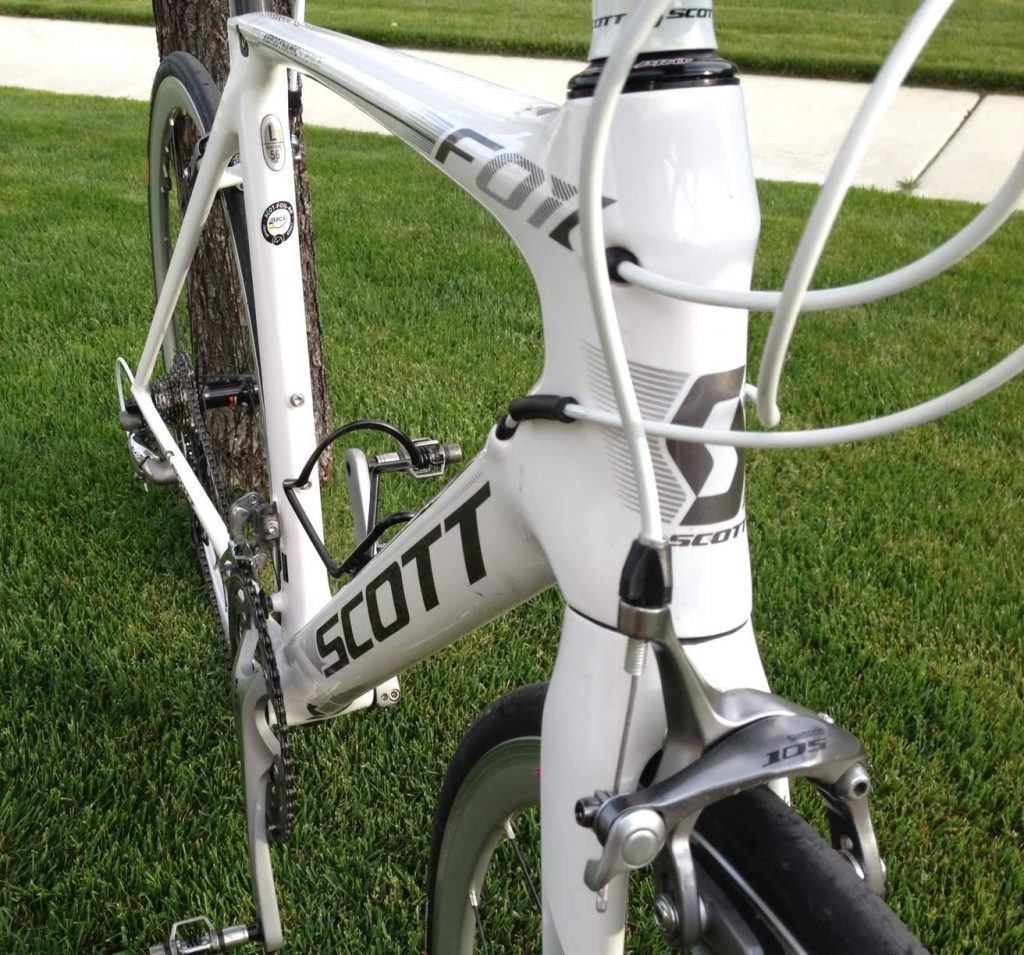 Clearly, not all road bikes are created equal. Seemingly-superficial differences between frames, carbon fiber layup and tube shapes really do matter and really do make a significant difference in on-road performance. With last year’s launch of the Scott Foil series, I was interested in finding out first-hand just what the magic sauce was.

UPDATE: While this is the 2012 model, the same frame used through the 2015 models. The 2016 Scott Foil is a new design and is even faster and racier than this model.

When the Foil platform was introduced, I was immediately drawn to it. The engineering behind the latest crop of everyday aero road bikes is amazing. From the Ridley Noah RS to the Specialized Venge, manufacturers are pushing for the most aerodynamic shape allowed under UCI standards without losing any all-around performance characteristics. So, with the Foil 40, you get absolutely the best aerodynamics in a race-worthy, budget-minded spec.

The build is straight-up Shimano 105 with a Scott cockpit, Ritchey carbon post and Selle Italia saddle. The wheelset  is also from Shimano, the WH R501 – 30 Aero with taller profile, rims and bladed spokes. They feature 20 spokes in the front and 24 in the rear. While the build could be considered pedestrian, I’d say it is an excellent execution and one of the best values in this price range.

Scott’s engineers put out some of the finest carbon fiber bikes on the planet and the Foil is outstanding. Looking it over, I daresay it is one of the sexiest frames I’ve seen. I love the sleek lines and large, subtly-aerodynamic tubes. In the vanity department, however, the wheelset on my bike was silver and made the bike look a bit odd. All the product shots I’ve seen feature the black wheelset, so I must have just been one of the lucky few. All vanity aside, the R501’s are decent wheels for the money. In a $2600 package, you’re going to sacrifice some in the wheelset, but they are admirable overall. The only major gripe with them is that during standing sprints or climbs, you can feel them flexing.

The frame simply looks outstanding. Every tube is optimized for reduced wind resistance. Everything from the sculpted head tube to the triangular-shaped chainstays are optimized to minimize drag while increasing stiffness and power transfer. The frame continues to draw attention from onlookers for its sexiness.

The Foil doesn’t just look good, it has serious zip. When you do stand on it, the frame transfers all of your energy to propelling you forward. I love my Roubaix for all-day riding, but this bike has major get-up-and-go. When pushing hard at speed, the Foil simply slices through the wind without any noticeable drag. It’s ultra-quiet at high speeds and really feels as if it is a hot knife through butter. It feels amazing.

As a point of validation on the overall speed and performance of the Foil 40, I’ve been quietly crushing all my PR’s on Strava with every ride. I feel like I can push a higher gear for longer, thanks to the overall efficiency of the Foil.

Since the Foil is touted as a race-worthy bike, I didn’t know how well-rounded it would be. My first thought was that it would excel at long rides with rolling hills — and it does. I also thought that it may not be as capable of a descender as other bikes, but I was very wrong. It seems as if the aerodynamics help put this bike’s downhill handling into an elite class. Fast and steep descents are conquered with confidence. I’d venture to say it’s the best-handling bike I’ve ridden.

Keep in mind that the 11-25 cassette may not be the best for steep, grueling climbs, but a larger 105 cassette can be had for $60 at PricePoint, so it’s an easy upgrade. I may change to a 12-27 or 11-28 just to see if a higher cadence will help on steep climbs.  However, I’m getting personal record times on some of my less steep climbs, so it’s pushing me to spin a larger ring and maintaining more speed.

The Foil 40 is equipped with a full Shimano 105 drivetrain. This no-nonsense grouppo offers a killer price-to-performance ratio with crisp shifting and powerful braking. I’m a snob, so I do admittedly miss the feel of carbon levers, but it’s easy to get past that when you consider the wallet-friendly price point.

A last note on the ride quality. Yes, the Foil is zippy and responsive, but it is also surprisingly-smooth on the road at lower speeds where road chatter seems to disappar. At 20 mph or greater, it feels tighter and more responsive, thus road noise becomes a bit more pronounced. The result is a little bit rougher of a ride, but with a hefty dose of responsiveness.

Aero road bikes aren’t just for time trials and triathlons. The Scott Foil 40 gives you aerodynamic performance in a bike that can handle just about any terrain at a budget-friendly price point. You’re gonna be hard-pressed to find a better value. KAPOW!