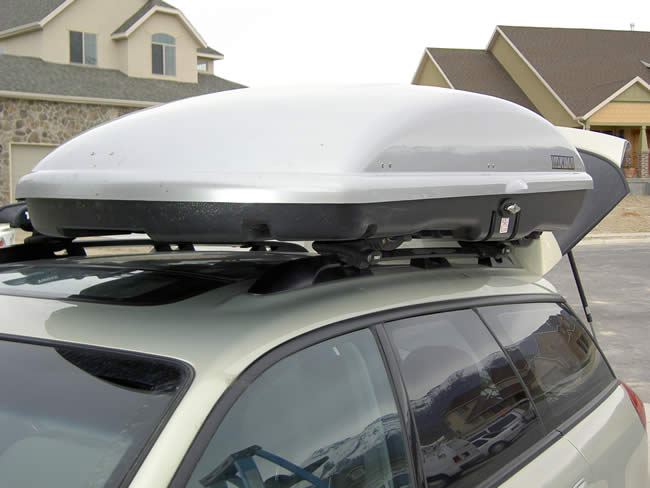 The seesaw battle for luggage box supremacy goes back and forth between Yakima and Thule. Each company is in a constant battle to trump the other. This time, Yakima has put a shot right across the bow of the Thule battleship by introducing a flexible and functional luggage box in the all-new Platinum Pro 16S (“S” is for short). This new box design is built to fit on shorter rooflines of mid and compact-sizes SUV’s and wagons without interfering with the rear hatch.

Cargo boxes are a necessity around these parts, and the Yakim Platinum Pro series is making headway into the market with a solid offering of performance, features and good looks.

The Yakima Platinum Pro 16S comes in two colors: silver metallic and black. Those are the de facto color schemes for cargo boxes because the neutral colors look nice on nearly every vehicle. As is standard for top-of-the-line boxes, the entire Platinum Pro series of boxes has a hinge system that allows for easy opening from either side of the vehicle.

As you would guess from the name, the Yakima Platinum Pro 16S offers 16 cu. ft. of storage capacity, which is perfect for all the gear for a weekend hike, or for a fleet of skis, poles and wet gear.

The 16S comes with the Yakima Rapid-Fire mounting system. This consists of four curved attachment arms that slide underneath round, square or factory crossbars with ease, then tighten with an adjustable lever inside the box. The system is simple and easily adjusted on the fly.

Particular attention was also paid to the aerodynamics of the box. Using a simple teardrop design, the Platinum Pro 16S is quiet on top.

How does the 16S perform?

My personal vehicle is a 2005 Subaru Outback. As a loyal Subaru owner, this is my 4th Subaru, but the first one I’ve had with a rear decklid spoiler. Though the rear decklid spoiler adds a nice touch to the overall look of the 2005 Subaru Outback, it significantly reduces the length of cargo box that can be placed on top. I had been using a standard Thule 6-pair ski carrier for years, but with the new Outback design, my tips now prevented the rear hatch from opening all the way. In frustration, I finally decided it was time to get a box. But, after looking at all the offerings available and making a few phone calls, I couldn’t find a box that would accommodate long enough skis (186cm) and yet still clear the rear decklid of the 2005 Outback.

My search lead me to Yakima.com and the Platinum Pro 16S. The 16S immediately caught my eye because the specs say it can accept up to 185cm length skis–my longest pair is 186cm, so I felt it could fit. The short boxes from Thule could only carry up to 180cm length skis. Most expert skiers ride 180-186cm length skis, so Thule is missing the mark with that design.

So, I quickly fired off an email to Yakima customer support to find out the mounting length needed for the 16S. Within two hours, the Yakima Customer Service rep said that I had 51″ of mounting length between the front crossbar and the back of the box–it would fit perfectly! I knew that a whole slew of 2005 Subaru Outback owners would be rejoicing!

When the box arrived, everything was put on hold until it was installed on top. My initial impression on the box was that it looked bigger than I had imagined. I was stoked at the thought of all the gear that I could now carry safely on top of my vehicle. The stinky campfire smell would now be isolated into the box, not the inside of the car! On a recent trip, my camping stove started leaking in my backpack. I loaded the pack into the car and noticed the smell. I just tossed it up top and no more smell inside the vehicle. You can do the same with stinky diapers, campfire clothes or sweaty friends.

The Rapid-Fire mounting system securely installs the Platinum Pro 16S in minutes. Once you get the hang of the mounting procedures, adjustments and all-out removal of the box is only a matter of 2-3 minutes. There’s alot of flexibility in mounting length of the box because both the front and rear latches can move up or back along a 12″ channel.

On top of the vehicle, the 16S rides quiet and looks good. I don’t notice much wind noise with the 16S, so that was a relief. Nobody wants to have a their luggage box whistling Dixie on the freeway. One note… the first time you close the box, be sure to hear ALL THREE clicks! The first time I closed the box, I didn’t think about that and drove off. About a mile down the road, I saw something fly out of the box–the instruction manual. I pulled over, ran back to get the manual, then closed the lid–making sure I heard all three clicks this time. A little embarassing, but no harm done.

Opening and closing the 16S is easy. Since it can be opened from both sides, the 16S is flexible enough to mount wherever its easily accessed. The hinges open the lid quickly and keep it open until you want to close it. The locking mechanism and handle are designed for easy use.

The most important feature of the Platinum Pro 16S is its ability to carry longer length skis. The ultimate test was with my Head MoJo twin tips in the 186cm length. I was worried with the girth of the MoJo’s and the twin tips, that they wouldn’t fit inside the 16S. Much to my surprise, they fit inside with room to spare. Because of the cross supports at the front and back of the box, longer skis have a place to rest tips and/or tails where needed.

The Yakima Platinum Pro 16S is currently the most flexible rooftop cargo box on the market for small SUV’s and wagons. Its design is good looking and functional enough to securely carry all your gear. For vehicles with a rear decklid spoiler (like the 2005 Subaru Outback), the 16S clears the spoiler and allows the rear hatch to open completely without hitting the box. Skiers will rejoice because 186cm length fat twin tips will fit inside with room to spare. Yakima has nailed it with the Platinum Pro 16S… it’s spot on for the compact SUV and wagon market!