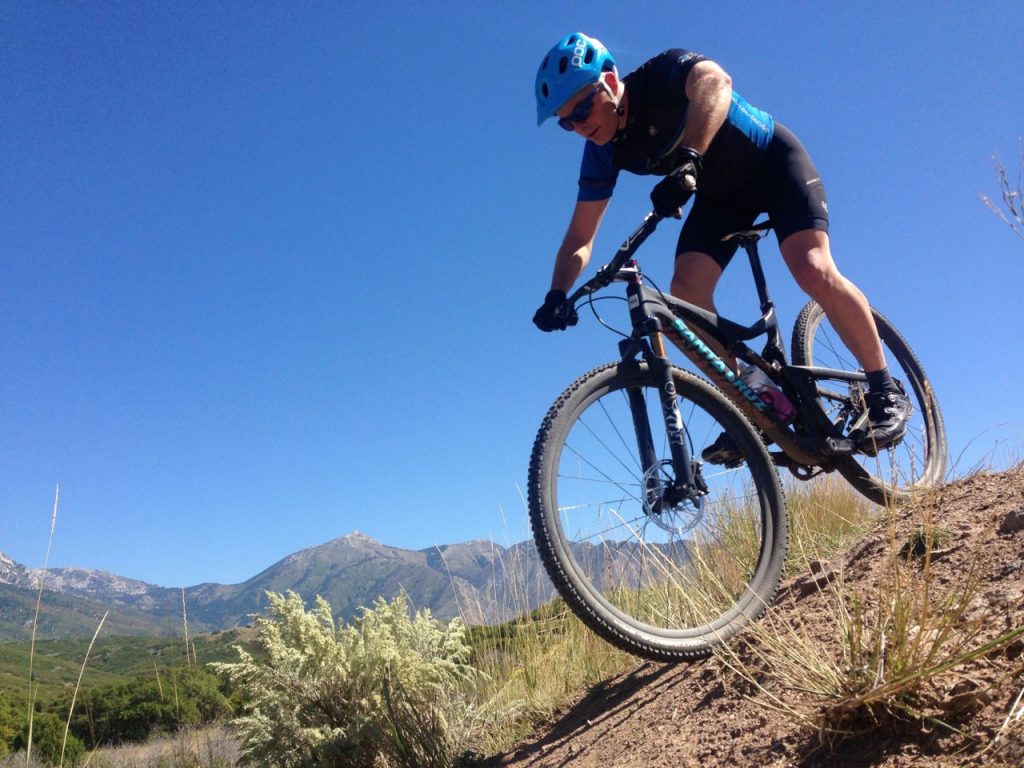 With several years now gone since I rode the previous Tallboy, the ride character of Santa Cruz’s best-selling bike has long since left my mind. I know it was a great bike, but after 4 years, nothing really stood out. With the Tallboy 2 coming out mid-2013, I had hoped to ride one earlier, but I’m pretty stoked on the 2015 design and the performance improvements from the previous-generation model are flooding back with every pedal stroke.

Tallboy Gets Visual Overhaul for 2015

For 2015, the only changes are cosmetic, but I’m quite fond of the new black/blue/red color scheme and trailside oglers seem to agree. The chosen build kit for my test bike is entirely custom with a slew of top-end components. Here are some highlights:

The full package really left very little on the table and provided a durable and capable bike that absolutely inspired confidence all over the mountain. Having ridden nearly every competing frame on the market, I was anxious to see how the Tallboy CC would perform.

Nothing the Tallboy Can’t Handle

I like to ride fast and push myself to redline on undulating terrain and even moreso on climbs. There’s nothing quite as exhilarating as passing people on the uphill like they are standing still. Good 29ers have a knack for ascending at breakneck speeds because once you build that momentum, nothing will stop your progress. The Tallboy was always a willing and able dance partner.

With the Tallboy C, you get the much-heralded VPP Suspension design that keeps the rear wheel planted with gobs of traction — no matter how steep the terrain gets. When pushing extra hard on steep or challenging terrain, I could stand with confidence, knowing that the rear tire would hook up (once I figured out where the sweet spot was). Like any bike, there is a sweet spot for standing ascents and the Tallboy has a forgiving range in that regard. You can make it loose traction, but a quick weight shift and blessed traction returns in a jiffy.

I’ve been particularly impressed with the Fox 32 TALAS 29 I’ve had on this bike. It is the perfect match here with on-the-fly XC-to-trailbike adjustability. Long, flat sections or endless climbs — 90mm all the way. Technical terrain or bomber descents — 120mm for the win. With that kind of versatility at the flick of a lever, I’m a bit surprised that Santa Cruz doesn’t offer the Tallboy with a TALAS fork from the factory.

When descending, I’ve been very impressed with the Tallboy CC’s ability to maneuver in and out of tricky situations. Technical drops, knarly baby-heads and high-speed flow trails were met with squish and smoothness beyond what the 100mm travel says on paper. I have loved getting air and simply carving up the trails. The 17.5″ chainstays, are middle-of-the-pack and sometimes manuals aren’t as natural as other bikes, but airtime has always been confident and easy. And, watch out for pedal strikes as this bike is particularly prone in that regard.

When I tested the Ibis Ripley earlier this year, I spoke about how zippy it felt coming out of corners and under initial acceleration. I’m standing by the Ripley as the zippiest and most responsive in its class (it’s gonna be hard to beat). That said, the Tallboy exhibits comfortable and capable responsiveness coming out of corners and on initial gas, but it doesn’t quite match the magic that is the Ripley — in spite of having 20mm less travel.

While it may not feel quite as zippy, it remains supremely capable as evidenced by some shiny Strava hardwear I’ve earned aboard the Tallboy.  Rocking the 750mm bars has really given me extra leverage to lay this bike into corners and have some of the most fun I’ve ever had on a bike. Ultimately, you know how you like your cockpit set up, but I prefer the negative rise stem and 750mm low riser bar combination.

Steering precision is fantastic on the Tallboy as well. Many 29er detractors talk of the vague or floppy handling characteristics of the wagon wheels. At this point, all major manufacturers have this dialed. With all the talk of fork offset and G2 geometry, the Tallboy is built around “standard” 44mm offset forks. Santa Cruz does not recommend a G2 fork on this bike — there is no need as this bike handles predictably under all conditions and speeds.

Further evidence of just how capable and fun the Tallboy is, I’ve got Strava-backed proof that the Holy Grail does exist — and I found it on my local trail network. The following ride consists of 18 segments and I got PR’s, second or third best times on every single segment. I’ve never done that before and may not do it again.

It’s a Keeper — No Question

When asked about the performance of the Tallboy, I’ve had plenty of praise to go around. My chosen build kit is the perfect match on this bike and brings out the best of all its positive traits. It can feel like a borderline-enduro bike, but it can also feel decidedly XC (ish). That’s what I love about this bike the most — it’s just so darn versatile.

Everything about the Tallboy is also built for longevity and serviceability — something I particularly love about all Santa Cruz bikes. The standard 73mm BB shell may seem old-fashioned, but makes for creak-free performance. Adding to that are the IS brake tabs, which eliminate the fear of stripping the direct-mount threads. And, something I particularly like — external cable routing! I love internal routing on road bikes, but I’m not as big of a fan on mountain bikes.

Rounding out the durability package is the addition of a downtube skidplate and chainstay protector — both nice touches.

The only thing that has been vexing to me has been subtle creaking in the rear lower pivot. The suspension was dead silent for months until I had one very wet ride. Greasing it up does seem to reduce it, but hasn’t eliminated the squeak. Speaking of grease, I also had a heck of a time getting the grease gun back off the ports after lubrication. I don’t know if my nozzle is too small or what. I can get it on, but getting it off requires patience and Herculean strength.

The Tallboy has been Santa Cruz’s best-selling model for quite some time and the latest version should solidify that position. It is wicked-fast all over the mountain and really makes every trail a 10 out of 10 on the fun meter.

The Tallboy 2 really delivers. This bike spanks everything -- from steep, gnarly ascents to rock-filled descents. It's the kind of bike that makes you feel like a superhero.